Staying in of a Saturday night? Here's the lineup for The Ray D'Arcy Show.

Saturday nights can only mean one of two things - you're heading for a night out on the town, or you're chilling at home on the couch.

If you're at the latter, you may be interested in seeing the lineup for The Ray D'Arcy Show.

Here's who we're dealing with this week:

First up is '80s icons Martin Kemp from Spandau Ballet and his wife Shirlie Holliman from Pepsi & Shirlie and Wham!, who will be on to discuss why after 31 years of marriage, they've finally done an album together.

Next up is Fair City cast members Wes Doyle, George McMahon, Adam Traynor and Johnny Ward, as well as members of Baldoyle United Football Club, will chat to Ray about their upcoming charity football match.

Then we've got NASA datanaut and Miss Universe Ireland Fionnghuala O’ Reilly to talk about "girls who code", and the upcoming Miss Universe competition in Atlanta. 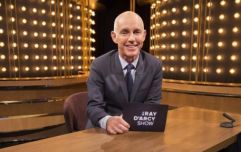 END_OF_DOCUMENT_TOKEN_TO_BE_REPLACED

Then it's 13-year-old Anna Kearney, who will be representing Ireland in the Junior Eurovision competition in Poland next week.

GP and mental health expert Doctor Harry Barry will also take to the couch to talk about the negative effects of social media and what measures people can take to safeguard their mental health.

The Ray D’Arcy Show kicks off on RTÉ One at 9.40pm on Saturday.


popular
David Beckham shared his dinner on social media and we really wish he hadn't
19 brilliant books to read while you're social distancing
Disney Plus announces new titles coming in April
Nikon is offering free online photography classes for the month of April
Dad hides coronavirus symptoms from hospital staff in order to see newborn
5 new additions to Netflix to spend your weekend watching
My sister is a nurse and she recommends this hand cream for soothing dry hands
You may also like
1 year ago
This week's Ray D'Arcy Show lineup is a verrrry interesting one
1 year ago
Viewers were not happy with what Samantha Markle said on The Ray D'Arcy Show
1 year ago
Meghan Markle's sister Samantha is going to be on the Ray D'Arcy show this weekend
1 year ago
Terminally ill Vicky Phelan's incredibly brave interview on The Ray D'Arcy Show
2 years ago
Richie Sadlier's words about the importance of consent struck a chord with viewers
3 days ago
#Covid-19: Keywest release fundraising music video for Ordinary Superhero in tribute to frontline workers
Next Page