Cartoon series SpongeBob SquarePants has been turned into a Broadway musical.

The animated series about an optimistic sea sponge has been reimagined as a colourful stage production, including all of the main characters (yes, even Squidward).

The show first premiered in Chicago in spring 2016, before the move to Broadway was announced earlier this year. 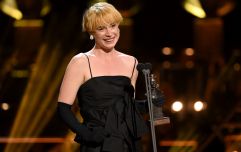 END_OF_DOCUMENT_TOKEN_TO_BE_REPLACED

According to Playbill, the musical tells the story of how SpongeBob and the rest of the Bikini Bottom work to save their undersea world from total annihilation".

So, in other words, it may be a little different than the cartoon you grew up with.

The show, which officially opened on Broadway this past Monday, is selling tickets for around $98 (€82) each.

It features a number of original songs from John Legend, Cyndi Lauper, Areosmith's Steven Tyler and Joe Perry, as well as Sarah Bareilles, among many more.

But the artists weren't writing SpongeBob songs on just about anything.

“All of the musicians got a brief on where their song fits in the story, so they weren't randomly writing songs on the topic of SpongeBob.

“They knew where it fit in the story.”