Holly Willoughby suffers back injury live on This Morning

Holly Willoughby has revealed she suffered a back injury live on This Morning while uncrossing her legs.

The TV presenter, who recently celebrated her 40th birthday, revealed the news during the Spin To Win segment of the ITV show saying, "You might have noticed I'm on this side today, that’s because during the show I uncrossed my leg and have pulled my back because now I’m over 40 that’s the stuff that happens." 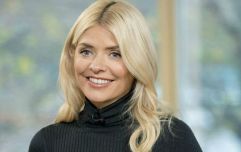 END_OF_DOCUMENT_TOKEN_TO_BE_REPLACED

Holly went on to reveal that she's swapped out her high heels for "flip flops" for the foreseeable as her co-host, Philip Schofield, poked fun at the star advising her not to go too far; "You can’t actually walk out to get the tombola, not at speed anyway. It took a long time to get her back in from outside, let me tell you."

Taking to Instagram this morning, Holly revealed she's "back in flats" and aims to be careful as she showcased her daily outfit for the show. Instead of her usual stilettos, the mum-of-three was sporting a pair of black flats from Maje.

You never know what might happen on live TV and honestly, we much prefer a comfortable shoe! Safety first.