James Corden is a man who knows how to have some fun.

The Gavin & Stacey star (never forget your roots, James) has seen his popularity rise remarkably since taking over as the host of the Late Late Show, one of the best-loved talk shows in all of America.

So how does a London boy like Corden use this to his advantage? By organising carpool karoake with some of the biggest names in show business and hosting rap battles with the rest. We can't say we blame him to be honest - if we could do the same, we would. 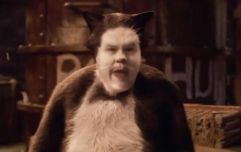 END_OF_DOCUMENT_TOKEN_TO_BE_REPLACED

His latest venture has been to challenge comedian Kevin Hart to a rap battle, and the results are just as incredible as we hoped.

While you might expect something like this to be a tame affair which has been pre-approved by Hart's publicist, Corden immediately sets down a marker by tearing into the diminutive comedian for his height (or lack thereof).

But don't worry, Hart more than rises to the occasion, giving it back just as hard as he gets it.

In the end, the crowd comes out in favour of Hart but we feel like Corden had it wrapped up until that final set of bars from the Central Intelligence star.

popular
Love Island fans think someone has left after Luca arrives back to empty bed
TikTok sued after girls die during 'blackout challenge'
Friends creator says they regret not using correct pronouns on the show
Airport outfits are all the rage as we head abroad - here are the 4 best ones
Penneys has a perfect dupe for Charlotte Tilbury's Flawless Filter foundation
Ofcom has received nearly 800 complaints about Love Island so far
Samuel gives his take on Paige and Jacques while Tasha cracks on with Billy in Love Island tonight
You may also like
2 months ago
James Corden announces he's leaving The Late Late Show
1 year ago
Prince Harry praises Netflix's The Crown, says it's "loosely based on truth"
1 year ago
Prince Harry is going to be on Carpool Karaoke soon, apparently
2 years ago
'This looks bad' James Corden comes clean on Carpool Karaoke controversy
2 years ago
'It's just bullying': James Corden responds to TV host's fast-shaming comments
3 years ago
The trailer for the new season of Carpool Karaoke is out and OMG, so good
Next Page