Jinx fans: Robert Durst has been sentenced to time behind bars

Fans of The Jinx will be all too familiar with the life and story of Robert Durst.

He was the centre of the six-part documentary investigating the death of his wife, Kathleen, his friend Susan Berman, and his neighbour Morris Black.

While Robert admitted to the death of his neighbour but claimed it was self-defense, he still pleads his innocence for the first two murders. 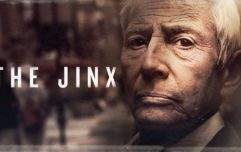 END_OF_DOCUMENT_TOKEN_TO_BE_REPLACED

But now, he has just been sentenced to seven years and one month in prison on weapon violations.

According to The New York Post, a federal judge in New Orleans signed off on his plea bargain which will see his serve time behind bars.

Durst, who is now 72 years of age, is still facing murder charges in California for the 2008 murder of his friend Susan and in August he will be transferred to California to face trial.

popular
Ronan Keating worried about son Jack as he is "quiet" on Love Island
No one was able for Andrew and Dami's kisses on Love Island last night
Bonnie Langford Splits From Husband Of 20 Years
Love Island's Gemma finally tells villa about dad Michael Owen on TV
Bonnie Langford Speaks Out About Divorce
Penneys has a perfect dupe for Charlotte Tilbury's Flawless Filter foundation
Gemma Owen gets to know Jack Keating as her head turns on tonight's Love Island
You may also like
6 years ago
Before Making A Murderer, There Was The Jinx
6 days ago
Wait, are former contestants returning for Casa Amor?
6 days ago
Michael Owen hilariously responds to Love Island's heart rate challenge
1 week ago
Love Island: Danica sets her sights on Andrew as Luca asks Jacques about his relationship with Gemma
1 week ago
Love Island fans think Luca is after Gemma because of her dad
1 week ago
Friends fans shook after finding out Joey's agent played another character
Next Page