So lads, last night was a busy one in the world of celebrity.

Of course, we had the BAFTAs, which took place in London's Royal Albert Hall last night.

END_OF_DOCUMENT_TOKEN_TO_BE_REPLACED

But on the other side of the pond (and more importantly, in my opinion) we had the Superbowl.

One of the biggest sporting events of the year, but it is more than just a football game.

It has become famous for its halftime show, which sees the biggest stars in the world take centre stage each year.

And this year was no exception, with Jennifer Lopez and Shakira headlining the event. 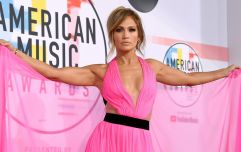 END_OF_DOCUMENT_TOKEN_TO_BE_REPLACED

WHERE do I even begin?

The two icons of Latino music performed a 15 minute set in Miami, and brought the entire stadium to its feet.

There was singing (of course), incredible dancing, guitar playing, drumming, rappers on stage, and a whole lot of extravagance.

All in all, would I go out on a limb and call it one of the best halftime shows in Superbowl history? I might.

Watch the full performance below, and decide for yourself.

popular
Only a matter of time before monkeypox spreads to Ireland, says expert
Wagatha Christie: Rebekah Vardy storms out of court just 30 minutes into final day
Vicky Phelan enjoys "pure bliss" solo trip to Doonbeg
Denis Sulta had a cameo in Derry Girls alongside his girlfriend Saoirse-Monica Jackson
Sainsbury's evacuated after several people fall ill with breathing problems
Claire Byrne Live viewers in shock as woman shares family DNA secret
Conversations with Friends praised for showing reality of endometriosis
You may also like
1 month ago
Jennifer Lopez confirms she is engaged to Ben Affleck with a glimpse of the ring
9 months ago
Jennifer Lopez and Ben Affleck just became Instagram official
1 year ago
"Please don't call me a liar" Jennifer Lopez addresses botox speculation
2 years ago
Get ready for Rise up New York! where three of our favourite divas will be taking to the (home) stage
2 years ago
Jennifer Lopez discusses the one role she really regretted turning down
2 years ago
J-Lo says men are 'useless' before the age of 33, and we'd believe it yeah
Next Page