Ahead of the launch of the new reality series, The Activist, TV star Julianne Hough has apologised for her decision to wear blackface in 2013.

Pictures of Hough wearing blackface circulated amid backlash to the new show, which pits activists against one another through a series of challenges and campaigns. The premise has since been described as performative and distasteful.

END_OF_DOCUMENT_TOKEN_TO_BE_REPLACED

Hough will join Usher and Priyanka Chopra Jones on the judging panel.

Addressing her use of blackface and some of the backlash to The Activist, Hough posted a statement to Instagram.

She opened her post by describing the last few days as a "powerful demonstration of real-time activism", and acknowledged that many felt the show "disrespected the many activists who have been killed, assaulted and faced various abuses fighting for their causes."

Hough wrote: "And because of all this, there is a feeling of insult, dehumanization, insensitivity and hurt that is being rightfully felt.

"I do not claim to be an activist and wholeheartedly agree that the judging aspect of the show missed the mark and furthermore, that I am not qualified to act as a judge." 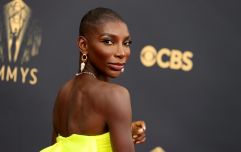 END_OF_DOCUMENT_TOKEN_TO_BE_REPLACED

She went on to address her use of blackface and described it as a "poor choice based on my white privilege and white body bias that hurt people and is something that I regret doing to this day".

She continued: "However, the regret that I live with pales in comparison to the lived experiences of so many. My commitment has been to reflect and act differently. Not perfectly, but hopefully with a more developed understanding that racism and white supremacy is harmful to ALL people."

She later added: "I'm going to continue to listen, unlearn, learn and take the time to be fully present with everything that you have all shared because I don't just want to react. I want to digest, understand and respond in a way that's authentic and aligned with the woman I'm becoming."