From 1990 to 2000 Are You Afraid of the Dark entertained and frightened a whole generation of kids with its spooky tales.

Still, to this day, I can remember episodes like The Tale of the Lonely Ghost and The Tale of the Prom Queen, which were not only scary but also had touching storylines and were almost like mini-movies.

For over ten years now Are You Afraid of the Dark has been gone from our screens but just as the newest generation thought they were safe it's back and even spookier than ever!

The Midnight Society is back together and has a whole new bunch of campfire stories up their sleeves. 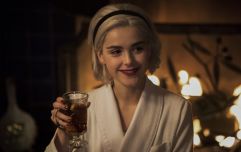 END_OF_DOCUMENT_TOKEN_TO_BE_REPLACED

From the sneak peek clip that's been released it seems that episode formula may have changed (or at least for one episode) as the story told by the fire comes to life. The characters can be seen battling against their worst fears in a bid to escape the nightmare that they have found themselves unwillingly in.

Horror TV for kids was huge in the 90s with shows like Are You Afraid of the Dark and Goosebumps, and I think it's about time it made its big comeback.

Get you remote and blanket for hiding behind at the ready as Are You Afraid of the Dark returns just in time for Halloween on October 11 to Nickelodeon.


popular
The €25 New look jumper that would be a cosy dream on cold mornings
BRB, running to Penneys for the €19 trousers that look like they cost ten times the price
Prince Harry and Meghan Markle to attend Princess Beatrice's wedding despite 'snub' reports
Apparently this new Lenor fabric softener smells just like the iconic Alien perfume
Coronation Street's Geoff and Yasmeen storyline sparks more than 100 Ofcom complaints
Netflix have released the harrowing true crime documentary series The Trials of Gabriel Fernandez
Holly Willoughby's Zara shirt is the workwear must-have you need in your life
You may also like
3 days ago
'Absolutely empowering' Meet the women exploring trauma through film in Ireland
3 days ago
You's Jenna Ortega cast in upcoming high school tragedy drama, The Fallout
3 days ago
Netflix's Babies documentary is making quite the impression online
3 days ago
'Big day today' Iain Stirling applauds Laura Whitmore ahead of Love Island final tonight
3 days ago
WATCH: Jahmene Douglas says X Factor was 'traumatising', urges singers to avoid it
3 days ago
The Friends reunion special could easily become a new series, if the one-off goes well
Next Page