"It must be so hard to have your heart broken and fall in love all in a day or two."

After teaser clips revealed that Kim would address the Tristan Thompson cheating scandal during her appearance on Ellen yesterday, the full interview finally aired and Kim didn’t hold back.

The mum-of-three appeared on the show yesterday and spoke about the recent revelations that Tristan Thompson had cheated on Khloe while she was pregnant with their first child.

END_OF_DOCUMENT_TOKEN_TO_BE_REPLACED

“Like, I don’t even know how to describe it besides it’s just so fucked up,” Kim said of the situation.

“Did you like him up until then?” Ellen questioned the star.

“You know, I… really… I feel like Khloe always dives into the relationships and puts her whole heart into everything,” Kim said hesitantly.

“I’ve seen her be in a really tough situation before, in her last relationship, and the family gets so emotionally invested in whoever each other is with… we treat them like family." 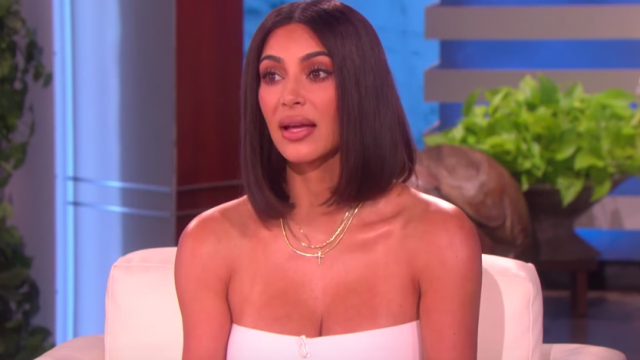 END_OF_DOCUMENT_TOKEN_TO_BE_REPLACED

The mum-of-three went on to talk about where Khloe’s head is at now that she’s welcomed her first child and whether or not she and Tristan are still together, saying:

“She’s just really focused on the baby. I think she’s not thinking of anything and just wants a clear head and just wants to be alone with the baby,” Kim said.

Kim also revealed that Khloe is still based in Cleveland although the family has flown out to see her a number of times since she’s become a mom.

“I think it must be so hard to have your heart broken and fall in love all in a day or two… she just needs some space” the reality star added.

Kim's interview aired after it was found that she had unfollowed Tristan Thompson on Instagram.