Those who follow Kim Kardashian on social media (which is pretty much everyone, right?) will be well accustomed to seeing adorable pictures of her three children.

However, Kim’s latest post is being called her “cutest picture ever” and it’s all down to the sweet smiling faces of four-year-old North and two-year-old Saint.

Yes, the two eldest children of Kim and Kanye were the focus of their mum’s latest post as they posed up a storm from the bathtub.

“My babies,” read the caption on the picture of the pair having a bath.

The post, which has been liked over four million times, has been showered with praise from many fans who couldn’t help but share the love for the adorable pair.

“The most gorgeous babies,” reads one comment. “You must feel so blessed.”

"Their beautiful smiling faces - you must be so proud," wrote another.

However, not everyone had positive things to say about the picture, of course. 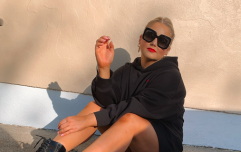 END_OF_DOCUMENT_TOKEN_TO_BE_REPLACED

Many commented that it was inappropriate to share such an image of her children on Instagram to hear 111million followers.

“In the messed up world in which we live this photo should not be on social media,” read one comment.

“Not because it’s a bad photo but because there are bad people out there and they get off on photos like this.

“As a parent, we have to think about our children first and their protection,” they added.

But Kim’s fans were quick in their defence of the star, commenting in their thousands.

“You people disgust me,” someone responded. “It’s the mother’s choice to do whatever she wants. You can’t tell her what’s wrong and right.”

“Nothing wrong with a mother sharing a picture of her loving children,” wrote another.

The mum-of-three was called “terrible and toxic” after she posted the ad on her social accounts.

popular
Get ready to live like the stars because Lidl is selling an entire home cinema range
These sustainable Irish sweaters are making people smile, and they're back in stock tonight!
#Covid-19: People should limit themselves to one sexual partner, says Dr Holohan
Lookdown looks: I was wearing tracksuits 24/7 before it was cool
The Skin Nerd on updating your lockdown skincare routine, and picking spots - if you HAVE to
'It's a little different': Stylist Lawson Mpame on Ireland's 'subtle' racism
Brown Thomas and Arnotts to phase reopening from next week
You may also like
2 weeks ago
Dogs Working From Home is the Instagram account that you need to follow during lockdown
2 months ago
Living with synesthesia: The Irish artist who experiences colour in an entirely different way
2 months ago
Check out the €20 New Look bargain that's just too good to miss out on
2 months ago
'Lift our spirits': The Irish artist creating custom illustrations during the #Covid-19 pandemic
2 months ago
Chowder 'the bear dog' is the adorable ball of fluff your Friday needs
2 months ago
'We said goodbye' Iain Stirling shares emotional tribute to Caroline Flack
Next Page