The actress said she was left a little worse for wear after shooting the scenes.

Kym Marsh’s Coronation Street character, Michelle, will find herself next on the list of Pat Phelan’s victims as the murderer returns to the street this week.

After his unwanted return, Phelan will have a serious confrontation with Michelle that results in a pretty nasty fight.

Well, turns out, shooting those scenes with actor Connor McIntyre left some pretty big marks on Kym’s body too, who says she was left battered and bruised afterwards.

“In the bistro, I’m being thrown around by Connor who’s a strong man and I had to throw myself on the floor,” she told The Mirror.

“It was very physical and I was bruised the next day. It was two solid days and it is always tiring filming quite emotional stuff.

“I was bruised. You do it but your body doesn’t realise it’s not really happening.

“But it was great as I’ve never played anything like this before.” 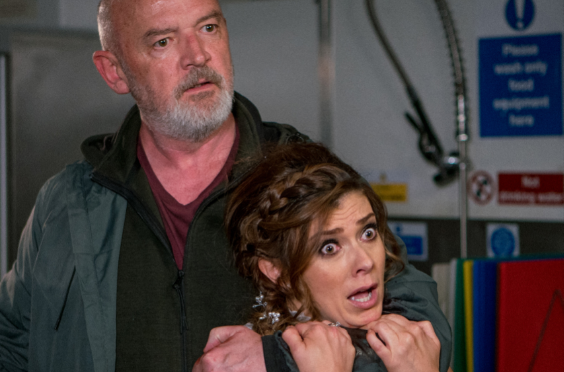 The fight escalates and Michelle eventually gets shot, but actress Kym is telling fans not to worry as she’s signed a new contract with the show.

“It was another first for me (being shot) and it’s good to get a bit of a challenge.

“But I’m really pleased to announce I’ve signed to Corrie for another year.”

Michelle’s fight with Phelan is due to air this week.

popular
Gwen Stefani reportedly pregnant with baby number four
People are freaking out thinking that their star signs have changed
Someone has ranked the penis size of men from all over the world
Remember Christian From Clueless? This Is What He Looks Like Now
A Tyrone midwife was chosen to feature on the cover of Vogue
After days of silence, Scott and Sofia finally comment on the break up rumours
Here's what happens on every day of your menstrual cycle (roughly)
You may also like
4 days ago
PERSONALITY QUIZ: Which Normal People character are you?
1 week ago
'It's just reminded me how rich Sally's books are': Normal People producers on adapting Conversations With Friends during lockdown
1 week ago
'That’s the most honest answer': Skeet Ulrich reveals why he is leaving Riverdale
1 month ago
QUIZ: How well do you remember the first season of It's Always Sunny in Philadelphia
1 month ago
QUIZ: Can you name these Rick and Morty side characters from their picture?
1 month ago
QUIZ: How well do you remember The Inbetweeners?
Next Page