This is going to be a great season.

This weekend it was announced that Glenda Gilson will be taking part in the upcoming season of Dancing With The Stars - and now two more celebs have been added to the line up.

2FM's Lottie Ryan and Fair City star Ryan Andrews have been announced as the next two contestants for the RTÉ series.

The announcement was made this morning on The Ryan Tubridy Show.

Speaking to Tubridy about his big news, Andrews said: "I'm a Strictly fan from years and years ago - myself my Mam and Dad always watch it.  And then Dancing with the Stars came to Ireland, same thing, every Sunday night.

"I think it's going to be a once-in-a-lifetime incredible adventure and I cannot wait to get stuck in," he said.

Still quite overwhelmed to be finally revealing that I will be joining the cast of this years DWTS! I am absolutely over the moon & really excited to get started on this crazy journey! ?? #DWTS #dancingwiththestars 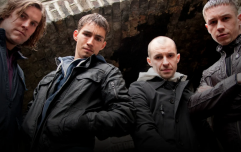 END_OF_DOCUMENT_TOKEN_TO_BE_REPLACED

"I've had friends and colleagues who have been on the show and I always cheered them on. I always said, 'I'd love to do it', so then when the phone call came in - it was a definite 'yes'. "

The next contestant for the show will be announced tomorrow, December 3, on Jennifer Zamparelli's show on RTÉ 2FM.

The TV series will be returning to our screens on January 5.

popular
The €9 buy fans swear is an EXACT dupe of Estée Launder's popular Double Wear foundation
Between seasons: These fab sale buys will see you through to autumn
How to cope in this humidity: From sleeping better to dealing with frizzy hair!
It turns out we're all peeling oranges wrong and this madness has to stop
This no bake 'Chocolate Refrigerator Cake' recipe has us drooling
Billy Connolly Has Harsh Words With Russell Brand, After Brand Asks a Woman to Flash Him...
Gwen Stefani reportedly pregnant with baby number four
You may also like
3 weeks ago
Follow-up to powerful documentary on Covid battle in St. James’ Hospital to air on RTÉ tonight
2 months ago
Normal People director Lenny Abrahamson to give online film class for RTE's Home-School Hub
3 months ago
'Suddenly, all the behaviours that you're watching feel amazing': Lenny Abrahamson on watching the Normal People TV series through the lens of the Covid-19 crisis
3 months ago
'I'm confident we've done it justice': Paul Mescal on playing Connell in the new TV version of Sally Rooney's Normal People
3 months ago
'It's a different way of watching those two characters exist': Daisy Edgar-Jones on the TV adaptation of Sally Rooney's Normal People
4 months ago
#stayathome: RTÉ to broadcast coronavirus concert special featuring Billie Eilish, Paul McCartney and other huge names
Next Page