We're very excited for this.

Remember how many hours you spent playing Halo growing up?

Maybe you were a solo player who loved a good old fashioned story mode campaign?

Or maybe you preferred to play online with a group. Either way, we'd wager that if you owned a game console in the 2000s, you also played a Halo game at some point.

But if you were a die-hard fan of the gaming franchise, you'll surely be buzzing for the new television show that is based on the games.

And the best thing about it? It's got a touch of Irishness in it.

Charlie Murphy, best known for her roles as Siobhan in Love/Hate and Jessie Eden in Peaky Blinders, will play Makee, an orphan raised by the alien Covenant that harbours a hatred of humans.

The character appears to be an original creation for the series, and not one that appears in the Halo games.

The cast is assembled. The table reads are complete. Production on the @Showtime Halo series is about to begin! pic.twitter.com/KNrPLYx260 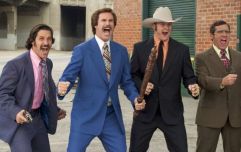 Here are the 7 best movies on TV this Saturday

END_OF_DOCUMENT_TOKEN_TO_BE_REPLACED

It was announced in June of 2019 that Showtime had ordered a 10-episode series based on the beloved video game, though its order has since been trimmed to nine episodes.

There's no exact release date for the show, but with production about to begin, it is expected to reach our screens in 2021.


popular
David Beckham shared his dinner on social media and we really wish he hadn't
19 brilliant books to read while you're social distancing
Disney Plus announces new titles coming in April
5 new additions to Netflix to spend your weekend watching
Nikon is offering free online photography classes for the month of April
10 summmer dresses we are ordering this week to cheer ourselves up
Katy Perry reveals the gender of her first child with Orlando Bloom
You may also like
1 year ago
Win 4 tickets to the Galway Races, celebratory dinner and VIP access at Halo!
3 days ago
#Covid-19: Keywest release fundraising music video for Ordinary Superhero in tribute to frontline workers
3 days ago
Merlin's beard! The British Library's Harry Potter exhibit is now available online
3 days ago
Ferris Bueller's Day Off has landed on Netflix and that's the rest of our evening sorted
3 days ago
Here are the 7 Studio Ghibli movies that arrived on Netflix today
3 days ago
Netflix's Love, Wedding, Repeat is the romantic comedy we never knew we needed
Next Page