Mariska Hargitay has welcomed Christopher Meloni "home" after the news he is set to reprise his role as Eliot Stabler for a Law & Order: SVU spin-off.

The actress - who starred alongside Meloni for the first 12 seasons of the crime drama - took to Instagram on Thursday to send him birthday wishes.

"Happy Birthday @chris_meloni Congratulations and welcome home Elliot Stabler," she wrote alongside a behind-the-scenes photo of the two of them, adding: "#It’sBeenAWhile #MissedYou #ElliotStabler" 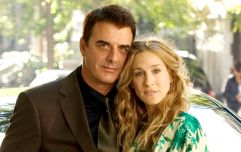 Where are they now? The men of Sex & The City

END_OF_DOCUMENT_TOKEN_TO_BE_REPLACED

Earlier this week, it emerged that Meloni was set to reprise his role as Stabler - almost 10 years after he left SVU.

His character was written off at the start of season 13, when Stabler made the decision to retire from the force.

Deadline report that the series - which will be based in New York - will see Stabler lead a unit in the NYPD's organised crime unit. NBC has given the currently-untitled crime drama a 13-episode order.

And we'll admit it: we're keeping our fingers crossed that there will be some kind of crossover with SVU. We would love for an on-screen Benson and Stabler reunion - and they are both based in New York, after all...

Showrunner Warren Leight previously spoke to E! about the possibility of Meloni returning to SVU - and it looks like it's good news for fans (especially with the new series confirmed).

A Bridgerton Podcast: The Irish hosted pod to fill the high society void in your heart

END_OF_DOCUMENT_TOKEN_TO_BE_REPLACED

"It's interesting to me. As long as the show is running, I feel like we will—someday, I would hope to see him again," he said, ahead of Law & Order: SVU's 21st season premiere.

"I don't know how, I don't know when, but, yeah, that's kind of, I think the fans and Benson and Stabler are owed that."

Girls With Goals || Her · Ep.153: Scholarship Squad - We chat to Facebook's Claire O'Hara about our Smurfit Scholarship fund.
popular
Where are they now? The men of Sex & The City
Someone has ranked the penis size of men from all over the world
Award winning Irish film about conversion therapy debuting this weekend
Met Éireann issue snow warning as we are due another big freeze
The latest TikTok beauty trend is drawing on under-eye bags to look tired
Dad designs bikini line for transgender teens
Here's what happens on every day of your menstrual cycle (roughly)
You may also like
1 week ago
10 of Samantha Jones' most iconic quotes from Sex & The City
1 week ago
I'm A Celeb producers book Gwrych Castle for 2021 series
1 week ago
Nicola Coughlan confirms "brilliant" new season of Derry Girls is in the works
1 week ago
Sex and the City reboot confirmed for HBO
1 week ago
Netflix’s new true crime doc examines one of the most infamous serial killers in US history
2 weeks ago
Here's how to play Cards Against Humanity online with your friends
Next Page