Michelle Obama is launching a children's cooking show on Netflix

Never mind the kids, we can't wait to watch this!

Children's health and education has always been one of her main passions, and now Michelle Obama is taking her love of kids – and healthy eating – to the big screen.

Mrs Obama is to star alongside puppets in a Netflix show called Waffles + Mochi that aims to teach children the joys of home cooking over eating ready meals.

She and husband Barack are among the executive producers, after they signed a deal with Netflix to produce series and films back in 2018. Previously, they have produced the movie Becoming for the streaming giant, the 2020 documentary based on Michelle's best-selling autobiography.

The show, which she describes as "hilarious, heartwarming, and simply magical," sees Michelle playing a supermarket owner alongside puppets and best friends, Waffles and Mochi.

Here is what Netflix has to say about the show, which is due to drop next month:

"Once upon a thyme, deep in The Land of Frozen Food, lived two best friends named Waffles and Mochi with one shared dream: to become chefs! The only problem? Everything they cooked was made of ice. 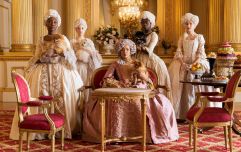 END_OF_DOCUMENT_TOKEN_TO_BE_REPLACED

When these two taste-buddies are suddenly hired as the freshest employees of a whimsical supermarket, they’re ready for the culinary adventure of a lifetime. With the help of friendly new faces like the supermarket owner, Mrs. Obama, and a magical flying shopping cart as their guide, Waffles and Mochi blast off on global ingredient missions, traveling to kitchens, restaurants, farms and homes all over the world, cooking up recipes with everyday ingredients alongside renowned chefs, home cooks, kids and celebrities.

Whether they’re picking potatoes in the Andes of Peru, sampling spices in Italy, or making Miso in Japan, these curious explorers uncover the wonder of food and discover every meal is a chance to make new friends. Waffles + Mochi is an exciting invitation to get kids and grown-ups cooking together in the kitchen and connecting to cultures around the globe."

In her own post about the news, the former First Lady writes:

"I only wish Waffles + Mochi had been around when my daughters were growing up, because it's the kind of programme that's fun to watch together as a family, and gives parents the peace of mind to know that their little ones are learning something, too."

Waffles + Mochi is set to premiere on March 16th.

Girls With Goals || Her · Ep.161: Feeling Peachy - Sharon Keegan of Peachylean on being an absolute BOSS!
popular
Aldi is selling a 2in1 grill and fire pit just in time for summer
Meghan Markle posed with a Kate Middleton magazine cover in 2014
Aldi is selling outdoor string rattan chairs for €30
Trial date set for former nurse charged with murder of eight babies
Cork school may need to close due to "serious" Covid outbreak
Naomi Campbell welcomes baby girl
Here's what happens on every day of your menstrual cycle (roughly)
You may also like
1 day ago
Chris Watts in protective custody in prison over "danger" of other inmates
3 weeks ago
The full list of all the new shows and movies coming to Netflix in May
1 month ago
Selling Sunset's Mary Fitzgerald gives us the latest on season 4 and opens up about her fertility treatment
1 month ago
There's another royal drama coming to Netflix and The Crown better watch out
1 month ago
The Crown season 5 to officially start filming in July
1 month ago
Prince Harry and Meghan Markle announce first Netflix show
Next Page