HBO has announced a new animated series based on the British royal family, and it sounds gas. 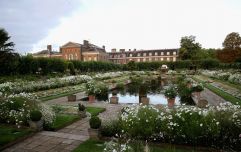 You can get married in Kensington Palace but it's CHRONICALLY expensive

END_OF_DOCUMENT_TOKEN_TO_BE_REPLACED

The name of the show is “The Prince”, and is based on the parody Instagram account run by Gary Janetti. B

The series will follow the royals through the eyes of Prince George, the eldest child of Prince William and Kate Middleton.

Serious lineup of a cast there, lads.

“I’m thrilled to be working at HBO Max and bringing them yet another series about a family ruthlessly fighting for the throne,” said Janetti.

“We’re so excited to bring the world Gary’s created on Instagram over to HBO Max, where our viewers can discover what his Instagram fans already know – that George can be hilarious, shocking, and surprisingly sweet."

“We can’t wait to see what Gary does with a bigger canvas to paint on than just a 1:1 square.”

We are GASPING to watch this.