If you're on the lookout for a new show to watch then Manifest has to be it. The trailer is only out and it'll probably be a while until it's available for us to watch in Ireland, but it has totally shook us and gripped us already.

In the 9-minute trailer (which is unusually long for a trailer), we see a family in an airport, ready to head back home from a vacation.

However, the flight is overbooked and the family have to split up. The sister, brother and brother's son all stay back and wait for another flight while the parents, brother's wife and their daughter all take off on the scheduled one. 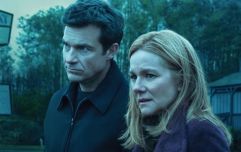 END_OF_DOCUMENT_TOKEN_TO_BE_REPLACED

The later flight goes through some major turbulence and it seems like it's the end for them all, but they recover, and land back home.

Except, when they arrive they're met with police cars and fire brigades and ambulances.

It is then revealed that they are five and a half years on from when they first took off.

Can’t stop thinking about that 9min clip of that plane going missing and coming back 5 years later but no one on the plane aged??? Proper hooked on a short clip but I need to know what happens

Just watch the trailer. You're going to be hooked.

popular
Traditional names such as Mary, Maureen, John and Michael may soon be extinct
Texas student says she "played dead" during school shooting to survive
First case of monkeypox confirmed in Republic of Ireland
Young mum packs her bags and travels the world with 3-year-old son
Viewers praise Dermot Kennedy for "powerful" performance after Late Late Show finale
Doctors urge women not to follow Kourtney Kardashian's 'semen' fertility advice
This girl absolutely SCHOOLED this guy for sending an unsolicited dick pic
You may also like
2 years ago
Sky share the first trailer for Maisie Williams' Two Weeks To Live and we're already hooked
2 years ago
Sky release trailer for 'I Hate Suzie' - a new drama looking at the aftermath of revenge porn
2 years ago
The first look at Netflix's Christmas romantic comedy Holiday In The Wild is here
2 years ago
WATCH: Margot Robbie's Harley Quinn ruffles feathers in the first trailer for Birds of Prey
2 years ago
WATCH: Armie Hammer and Dakota Johnson are pushed to the edge in chilling new film Wounds
2 years ago
The first trailer for Looking for Alaska is finally here and we're already hooked
Next Page