Stephanie Davis’ fans cannot get over how grown up her only son is in her latest snap.

Yes, over a year and a half after welcoming her first child and fans are shocked by how old little Caben looks in Stephanie’s latest post.

The actress shared a snap alongside her little boy on Instagram today and Caben didn’t look too happy to be posing for mummy. 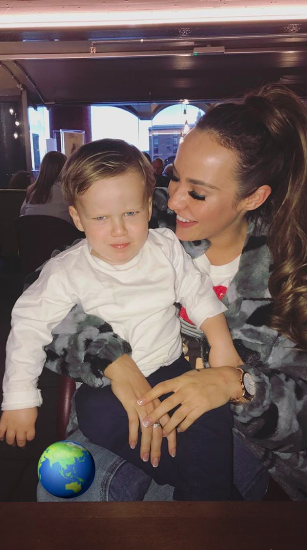 END_OF_DOCUMENT_TOKEN_TO_BE_REPLACED

Stephanie’s post has gotten many fans talking about how grown up her toddler has gotten since they last saw him.

The proud mum also shared a throwback snap of her little boy on her page, giving fans a reference for how much he has grown, saying:

“Love of my life. He looks so little here compared to now.”

END_OF_DOCUMENT_TOKEN_TO_BE_REPLACED

Stephanie welcomed her first child in January 2017 when she was dating former CBB star Jeremy McConnell.

The pair later split with Jeremy being arrested in the summer of 2017 after Stephanie was found with a broken nose, fractured ribs and two black eyes.

popular
Wagatha Christie: Rebekah Vardy storms out of court just 30 minutes into final day
Everything we know so far about Kourtney and Travis's Italian wedding
Claire Byrne Live viewers in shock as woman shares family DNA secret
Only a matter of time before monkeypox spreads to Ireland, says expert
Helen McCrory's children give heartbreaking tributes at her memorial service
Denis Sulta had a cameo in Derry Girls alongside his girlfriend Saoirse-Monica Jackson
Ashley Graham says she nearly died while giving birth to her twin boys
You may also like
1 week ago
The internet is losing it over Kendall Jenner trying to cut up a cucumber
4 weeks ago
Kourtney Kardashian says she’s ‘grateful’ her kids witness her and Travis Barker’s PDA
1 month ago
The Home Edit's Clea Shearer shares breast cancer diagnosis
1 month ago
Jada Pinkett Smith on her "terrifying" years-long struggle with alopecia hair loss
3 months ago
Sinead O'Connor reveals she will never perform again after her son's death
4 months ago
A clip has resurfaced of Machine Gun Kelly discussing a teenage Kendall Jenner
Next Page