Professional controversy causer Piers Morgan has gone and caused controversy again - by slagging off Love Island on TV. Who'd have thought it?

Rosie Williams appeared on Good Morning Britain after being brutally uncoupled by Adam on Friday, with Piers attacking her for quitting her job as a solicitor to “look stupid” on the ITV2 show.

Explaining why she sacked off her job, she described it as a “once in a lifetime opportunity”.

“So is banging your head on a brick wall for three weeks. You were a lawyer. What do your family think of you giving up this extraordinarily successful law career to make yourself look stupid on TV?”

"I don't think I made myself look stupid on TV" Rhondda's Rosie Williams clashes with @piersmorgan on @GMB over her decision to leave her law career behind to appear on popular @ITV2 reality show @LoveIsland pic.twitter.com/Y0lw65QuQQ

Williams was having none of it though. She said:

“My family are very proud of me I don’t think I made myself look stupid on TV. I was working 18 days in a law firm it’s not as glamorous as it seems. This once in a lifetime opportunity came up and it seemed like the best thing for me.”

Morgan then asked what she was hoping to achieve by appearing on the show, to which Williams replied she wanted “chance to spend 24 hours a day with hopefully someone I could spend the rest of my life with”.

“Most of these blokes in there are completely half-witted – why would you think you would find any match to be at your intellectual level?  If I was your family and you went through years of law study to give it all up to go on this show I’d be heartbroken.” 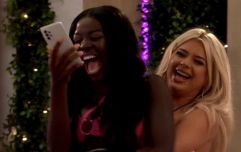 END_OF_DOCUMENT_TOKEN_TO_BE_REPLACED

“I feel like now I have a voice and a large following hopefully I can make a difference with empowering women,” she said. “I’ve had so many girls come up to me saying I’ve helped them not feel victimised and that they can stand up for themselves.”

To which he replied:

“Oh come off it Rosie. You think you’ve done more for empowering women by walking away from a very good law degree and career to go into the love island villa?

“Trust me, what was empowering was a young woman like you studying law to make a real difference in this country. Going on that villa was not empowering.

“Rosie, just go back to law please. Just put it down to a terrible aberration. I’m very disappointed in you without even knowing you.”

Obviously, nobody was happy with Morgan's comments because, let's face it, he was being really harsh.

Hated the tone of the interview by Piers Morgan of Love Island’s Rosie. Just aggressive and rude. This is why I don’t watch (usually)

Such a painful interview to watch with Rosie from love island. Piers Morgan was so despicable, insensitive and ill intented. I thought the purpose of interviewing someone was to listen to them not put them down. Shameful #GoodMorningBritain

@LoveIsland shut up piers Morgan its up to rosie on what she does u idiot @piersmorgan atleast shes happy and people are looking upto her for advise.

The incident comes after he tried and failed to outsmart former contestant Hayley last week. Chill out Piers, you know what I mean?