Another day, another rant by Piers Morgan.

The TV host is usually ticked off over one thing or another - today, it's the fact that Holly Willoughby and Philip Schofield have been using some pretty outré tactics to try and win an award for their TV show.

Their ITV programme This Morning is up against Piers' show Good Morning Britain for Best Daytime Show at this year's National Television Awards.

END_OF_DOCUMENT_TOKEN_TO_BE_REPLACED

Holly and Phil promised viewers that they'd have the cast of Magic Mike Live on to perform a routine on air if they won this year, making them winners for the eight time in a row.

Piers blasted the move this morning, branding it "sexist".

He even called on Holly to apologise for it.

END_OF_DOCUMENT_TOKEN_TO_BE_REPLACED

"Halo Holly and Saint Schofield, they’re so desperate to cling onto this title they win every year at the NTAs, they’ve actually got a bunch of male strippers, naked in a very sexist and exploitative way," he said.

"Why would you need that? Imagine if I’d used a bunch of naked women. 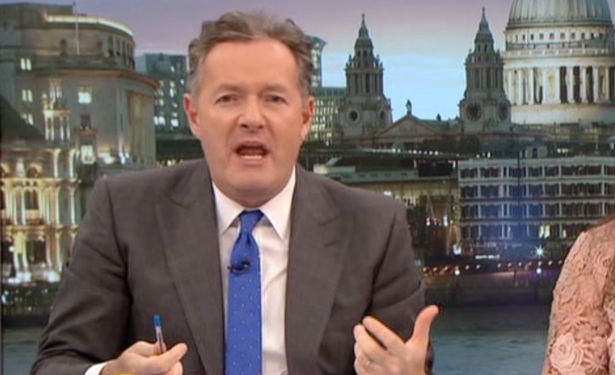 "I’m actually very annoyed. I think This Morning are being sexist and exploitative. I think they should be ashamed of themselves.

"In fact, I want a public apology from Holly Willoughby, the queen of the jungle. I’d like her to apologise for this overt use of naked male flesh in a shameless attempt to prop up their flagging, desperate..."

popular
Love Island’s Afia explains why Gemma’s dad has not been mentioned on show
Two dumped islanders have confessed their feelings for each other since leaving the villa
Love Island fans concerned over "bullying" of Ekin-Su
PSA: Casa Amor is happening - and soon
Shaughna Phillips brands Love Island heart rate challenge "fixed" and "vile"
Love Island fans are in shock after new boy Charlie revealed his age
Outrage as woman says doctor told her to "be quiet" during labour
You may also like
2 weeks ago
One boy will be left single as Davide makes his decision on tonight's Love Island
3 weeks ago
Does how late you enter the Love Island villa affect your chances? A super scientific study
3 weeks ago
Baggs family leave Gogglebox for "lots of exciting opportunities"
3 weeks ago
Passenger suffered epileptic seizure amid Dublin Airport weekend chaos
3 weeks ago
Alexis Bledel quits The Handmaid's Tale before season 5
3 weeks ago
This year's Love Island contestants will receive extensive mental health supervision
Next Page