It's only been a few months since Pretty Little Liars officially left our screens, and in that time, a new spin-off has been created and most of the girls have found new work.

But that doesn't mean the fandom of PLL is dead, as fans went absolutely wild for reunion which took place in Manchester this weekend.

@claraamfo I’m feeling smug chilling in my hotel room in Manchester because I’m meeting some of the Pretty Little Liars cast tomorrow ???

So the cast of pretty little liars are in Manchester all weekend.

Many cast favourites all met up for the first time in the UK for a fan convention.

Yep, Spoby were back together and it literally made fans' hearts melt.

Within the two-day event fans were able to meet the stars, get their autographs and even ask them a few questions. 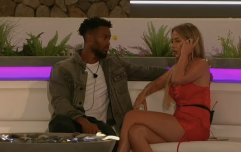 The reaction to Faye's apology was not as producers expected

END_OF_DOCUMENT_TOKEN_TO_BE_REPLACED

It was apparently the 'last time' people would be able to meet the characters all together, but you know... we're still holding out on a PLL TV reunion down the road.

But our favourite part of the reunion? Seeing Spencer and Toby back together again.

popular
The Daly Dish's Gina introduces newborn baby Gene to the world
Status red weather warning issued for two counties
Arthur Labinjo-Hughes' grandad says murderers “must never see the light of day again”
Man dies after being attacked by newly calved cow in Mayo
WATCH: The new star-studded trailer for the Harry Potter reunion show is here
Mask rule for primary schools is being revised by Government as a third of tests are children
These are the most popular baby names for 2021
You may also like
2 months ago
The Wanted announce their comeback to support Tom after tumour diagnosis
5 months ago
Una Healy would be "delighted" if The Saturdays reunited
6 months ago
QUIZ: Test your knowledge with this Ultimate Friends Character Quiz
6 months ago
QUIZ: How well do you remember High School Musical?
6 months ago
WATCH: The first trailer for the Friends reunion is here
11 months ago
The cast of Elf are reuniting this Christmas
Next Page