QUIZ: Can you name these Disney movies based off of the castle?

It's more difficult than it seems.

Whether it's a sprawling spooktacular estate or a jaw-dropping hilltop palace, most of Disney's animated classics involve some kind of castle.

There's even a few majestic palaces buried deep in the woods - and underwater. 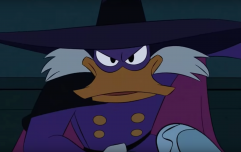 END_OF_DOCUMENT_TOKEN_TO_BE_REPLACED

No matter the locations, there's one thing that's a guarantee: these castles are going to be absolutely stunning.

Even when they may end up looking a bit run down.

(Seriously, have you seen Elsa's castle?!)

Disney fans are, at this point, pretty likely to be familiar with the members of the royal courts - as well as their subjects.

But how well can you remember the spots that the kings, queens and Disney princesses call home?

Do you know Princess Aurora's castle from Elsa and Anna's home of Arendelle? What about the differences between the underwater kingdoms of Ariel and Kida Nedakh's Atlantis?

What about what the kingdom of Dunbroch, from Brave looks like?

No matter how many times you may have seen these classics, it's bound to be a challenge for even the most die-hard of Disney fans.

So, it's time to put your Disney knowledge to the test and see if you can match these 13 castles to their films.

Girls With Goals || Her · Ep.151: 'A Story Shared' - Aoife P. Rafter on blogging during a pandemic and living with CF
popular
Royal family "concerned" that Meghan kept secret diary during time in UK
The Queen has banned Meghan Markle from wearing any of Princess Diana's jewellery
Here's what happens on every day of your menstrual cycle (roughly)
Someone has ranked the penis size of men from all over the world
Here's the average age people lose their virginity around the world
The way Diana told William about Charles's affair with Camilla will break you
How to INSTANTLY unblock your stuffy nose (we swear this works)
You may also like
1 month ago
Le Creuset have released a Star Wars collection and it's out of this world
2 months ago
QUIZ: Can you guess the Disney movie from a single image?
3 months ago
QUIZ: Can you name all of these Disney characters?
3 months ago
QUIZ: Can you name all of these Disney sidekicks?
3 months ago
Disney are now selling matching dog and human Hallowe'en jumpers and yeah, we definitely need them
1 week ago
WATCH: The greatest Late Late Toy Show moments of all time
Next Page