Red lipstick at the ready: Dita Von Teese is coming to Dublin

Pass the smelling salts: the burlesque queen, fashion icon and all-round girl crush has announced that she is bringing her tour Ireland. The Dita Von Teese: Glamonatrix show, which comes to Dublin next summer, is described as an evening of comedy and "sophisticated striptease". The show takes place at the Olympia Theatre on May 2, 2020, but tickets go on sale this Friday – giving us just under a year to get our winged eyeliner perfected and our corsets laced up.

As well as the star herself, the show features male, female and gender fluid performers and aims to celebrate diverse beauty and body positivity. But let's face it, no one wears clothes – and takes them off – quite like Dita, whose Martini glass dance is THE sexiest thing we've sever seen.

END_OF_DOCUMENT_TOKEN_TO_BE_REPLACED

Glamonatrix includes an update on that iconic dance, as well as three all-new routines from Dita that will see her popping out of a bejewelled birthday cake, playing lion tamer with a crystal whip, and riding a giant sparkling lipstick. Yes, really. 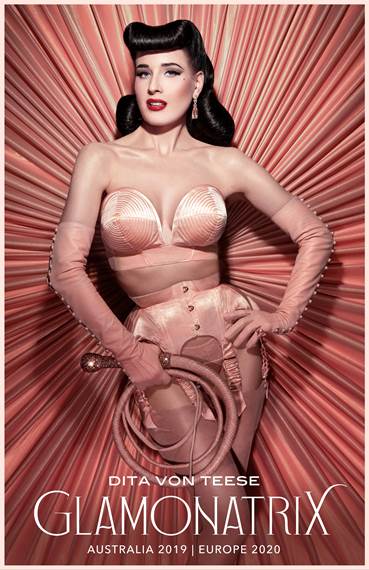 Dita says that she's proud  to be part of the modern burlesque movement:

"For me, burlesque has always been about finding my own power and confidence, embracing sensuality and encouraging others to do the same in their own lives. Glamour is the art of creating mystery and allure, and the new Glamonatrix show embraces all of these qualities."

This may be Dita's first performance in Ireland, but she's no stranger to these shores, having celebrated her wedding to Marilyn Manson here in 2005. The Gothic-themed ceremony was held at Gurteen Castle, on the Tipperary/Waterford border. The bride wore a flowing Vivienne Westwood dress that showed off her famous 22-inch waist, and guests drank from custom-made ruby-red Waterford Crystal goblets. Sadly, the marriage was to be short-lived, with the pair splitting the following year.

Now, Dita says she's happy to be bringing her biggest show to date to Europe.

"Being in these historic theatres with audiences coming dressed to the nines, creates this incredible atmosphere unlike I've ever seen before."

Tickets for Dita Von Teese: Glamonatrix are €65, and are on sale on Friday, June 28.

popular
Vicky Phelan says she wants to pass away in holiday home "for the kids' sake"
Scotland international rugby star Siobhan Cattigan tragically dies, aged 26
Stacey Solomon mortified after walking around shop in see through leggings
Meabh Feerick passes away after sharing that she felt "let down" by Irish healthcare system
Vicky Pattison thanks fans for support after doctors find ovarian cyst
Gwen Stefani reportedly pregnant with baby number four
Here Are The Top 20 Most Common Pin Codes in The World
You may also like
2 days ago
Planning permission denied for hotel on Dublin's Cobblestone pub site
1 week ago
Body of man found in unexplained circumstances in Dublin
1 week ago
Coppers to open at 6pm following Government's midnight closing rule
1 week ago
Man seriously injured following suspected shooting in Dublin
2 weeks ago
The Christmas market at Dublin Castle will return this year
2 weeks ago
Dermot Kennedy announces 2 huge gigs in Dublin next month
Next Page