Cute – but is it a classic?

Growing up, one of my favourite feel-good movies that my sister and I would watch on repeat was Father of the Bride.

It had it all as far as I was concerned – humour, love, family, chaos – all rolled up in one charming movie.

END_OF_DOCUMENT_TOKEN_TO_BE_REPLACED

However – did you know that the 1991 classic with Steve Martin and Diane Keaton was actually a remake itself? Yep, it's true. Based on the 1949 novel Father of the Bride by Edward Streeter, a movie with the same name was released the following year starring Spencer Tracy and none other than Elizabeth Taylor.

However, this time around, more than 30 years after the last Father of the Bride movie dropped, we're revisiting this story again, but with a fresh spin as it follows a Cuban-American family based in Miami, Florida.

Like its predecessor, the line-up of actors is impressive, with Andy García now playing hard-to-please father Billy, and his wife Ingrid is played by singer-actress Gloria Estefan. 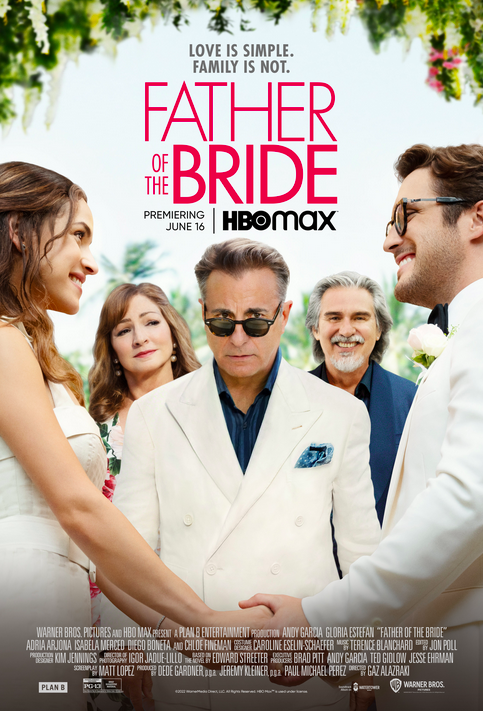 END_OF_DOCUMENT_TOKEN_TO_BE_REPLACED

There are similarities between the two movies and they do follow a somewhat similar format with domineering father Billy learns that his daughter has gotten engaged to Adan, a man she only recently started dating. And while his wife handles the unsuspected news more gracefully, Billy begins to spiral as the cost of the wedding and the involvement of the in-laws lead to chaos.

However, here is where the 2022 version of the movie starts to differ a little from the 1991 classic.

END_OF_DOCUMENT_TOKEN_TO_BE_REPLACED

Although Billy is initially upset, he gives his blessing to the couple and announces that he wishes to follow tradition by paying for the entire ceremony himself, given that he is the father of the bride. But this leads to fights between him and his daughter, as he wishes to make the ceremony more traditional and religious, while his daughter wants to break tradition and make it her own.

Oh, and it turns out there is an added layer of tension when we learn that Billy and Ingrid have, in fact, been having marriage problems, leading Ingrid to ask for a divorce. However, when the pair learn about their daughter's upcoming nuptials, they decide to hide it from the family and try to act like nothing is wrong until the wedding is over.

I love how the movie shows more diversity as far as the 'average American family' is concerned, with plenty of references to Cuban-American culture in Miami, as well as Mexican culture when Adan's family joins the group too.

In fact, it becomes a bit of a joke throughout the movie that Billy recounts the story of how he came to the US with nothing and managed to become a successful architect – but the story on how he got to America keeps changing from arriving on a plane, to later changing the storey to having arrived on a boat or even a life raft.

There is no denying it is a sweet movie with a very familiar story – but is it as good as the 1991 classic we all know and love? I just don't know.

popular
Dami explains why he was "angry" during the Love Island reunion
Dame Deborah James has followers in tears with final letter to her children before she died
Jacques O'Neill addresses Paige and Adam's relationship on Instagram
Emmerdale actor Sam Gannon dies aged 31
Woman (20s) stabbed fives times in attack in Co. Kerry
Olivia Newton-John's husband pays tribute following her death
Barry Keoghan announces the name of his baby boy
You may also like
1 week ago
There's massive flaws in the Virgin River timeline – and we can't unsee them
1 week ago
Group of screaming, crying islanders set to enter Love Island tonight
2 weeks ago
Multiple islanders are set to leave the villa tonight
2 weeks ago
Virgin River fans have a brand new theory about Charmaine's babies
2 weeks ago
Love Island producers to launch middle-aged spin-off for Mums and Dads looking for romance
2 weeks ago
The new bombshells go dating tonight, and some couples may be in trouble
Next Page