YAS! Saoirse Ronan is going to host the next episode of Saturday Night Live

Saturday Night Live is about to get super Irish!

Next week, the show will be on break for Thanksgiving, but the following week it has been confirmed that the host will be none other than our very own Saoirse Ronan.

On top of that, the special musical act for the night will be U2.

Ronan's latest movie Lady Bird is currently the second best reviewed movie of 2017, and there is some tremendous talk that she might be up for the Best Actress Oscar at next year's ceremony.

The movie doesn't reach Irish shores until February 2018, but U2 fans won't have to wait that long for their new album, Songs Of Experience, as it is released on Friday 1 December, the day before they perform on SNL.

If we were to guess, we'd say they'd most likely perform "Get Out Of Your Own Way", so don't be surprised is they manage to talk to the great Kendrick Lamar into joining them on stage. 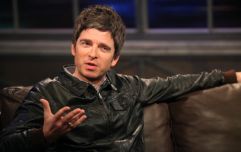 END_OF_DOCUMENT_TOKEN_TO_BE_REPLACED

As for the sketches on the show itself, we have to imagine that there will be A LOT of Irish-themed jokes.

Last night, the host was Chance The Rapper - and the musical guest Eminem, who rocked the stage with a rendition of his classic 'Stan' track - who absolutely threw himself into every joke he was given, and nowhere more so than with this sketch involving Chance as a hockey reporter completely out of his depth.

popular
H&M to close 170 stores this year due to dropping sales
Glossier: A first-time buyers guide to this cult beauty brand
Casper Walsh from Versatile got engaged this weekend, and the ring is INSANE
5 reasons why Limerick is an ideal staycation destination this summer
Boojum are now delivering pre-prepared meals that you can cook in your own home
Christmas FM returns tomorrow, July 9... No, really
QUIZ: How well do you remember The Princess Diaries?
You may also like
2 months ago
Bono has revealed that U2 bought €10million of PPE for Ireland's frontline workers
2 years ago
Bono admits to Ellen Degeneres that joining U2 saved his life
2 years ago
Ireland's richest people have been revealed and some will surprise you
2 years ago
U2's Adam Clayton has welcomed his first child with wife Mariana
2 years ago
Heading to U2? Here's the weather, stage-times and set-list
2 years ago
The following items are banned from the U2 concert in Croke Park
Next Page