Simon Harris signs up for "TicTok" and gains 38k followers

Please God, let there be dances.

We're in a young people's game lads, and the Minister for Higher Education knows it. Since its inception in 2016, TikTok has taken the world by storm garnering millions of users with its snappy video content, easy-to-use sharable quality and downright addictive nature. Honestly, the hours just drift away.

With that in mind, it's still not considered a place where politicians like to hang out... till now.

END_OF_DOCUMENT_TOKEN_TO_BE_REPLACED

A familiar face has been popping up on people's For You Page over the last 24 hours and it's fair to say, people are losing their reason. The Minister for Higher Education, Simon Harris, has finally taken the "plunge" and set up a TikTok account much to the delight of the nation it seems as he's already gained over 38k followers.

In his opening video, which has been viewed over 637k times, Minister Harris said that he's looking forward to "learning how to use this," and connecting with the wider public. Check out his introduction below:

In the description,  he's gone for Government Minister, Wicklow TD and optimist, which is very in keeping with his social media presence as it stands. His optimistic updates on Instagram over the course of the pandemic have kept people's spirits up and we're in no doubt that his TikTok account will do the same.

Of course, people had a few things to say about the surprise addition, with one observing that he had 25k followers for just making a cup of tea: 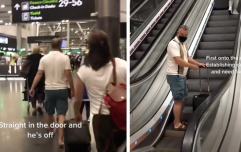 END_OF_DOCUMENT_TOKEN_TO_BE_REPLACED

A few people were quick to point out the minor spelling error in his first caption and yes, Minister Harris spelt TikTok wrong in his first post but who cares?

I'm a full month older than the man so I refuse to throw stones. Fair play Minister TikTok, keep that sweet content coming.

popular
The internet is saying the same thing after Ryan's Toy Show opening
Top 9 moments from the Toy Show we're still talking about
The Toy Show DJ brothers have been offered their very first gig
Vicky Phelan reveals how she's keeping up with her family Christmas traditions post treatment
Viewers in bits after Barry Humphries congratulates Dermot O'Leary on coming out
Four teenage boys arrested on suspicion of murdering 12-year-old girl in UK
We finally know what happened to Sam in And Just Like That
You may also like
5 days ago
WATCH: Woman "disgusted" as she catches man filming her in gym
2 weeks ago
Woman 'rolls down mountain', leaves hilarious review about her 5-star leggings
2 weeks ago
A TikTok mum shares life tips for people who doesn't have a mum in their lives
2 weeks ago
Who started the 'plant one tree for every pet picture' trend on Instagram?
3 weeks ago
Outrage after man criticises wife for bleeding after birth
1 month ago
Cinnamon rolls baked in a waffle maker might just be our favourite new food trend
Next Page