Sorry, but we need a Derry Girls prequel after that flashback episode

Derry Girls fans are calling out for a prequel after last night's episode, which focused on Erin and Orla's mothers when they were young.

The episode started off with Aunt Sarah and Ma Mary getting ready to head off to their school reunion, but viewers were also treated to a flashback to Derry, 1977.

END_OF_DOCUMENT_TOKEN_TO_BE_REPLACED

As time jumped back, we got to see what Sarah and Mary were like as teenagers on their school leavers' night.

We subsequently learned that Sarah and Mary got matching skull tattoos that evening, but decided to keep them hidden with concealer in the years that followed.

Shockingly, we also found out that Sarah and Mary were actually friends with Jenny Joyce's mother, Jeanette.

Fans were absolutely chuffed with the episode, and began calling out for a prequel based on Sarah and Mary's teenage years.

END_OF_DOCUMENT_TOKEN_TO_BE_REPLACED

One viewer tweeted: "As someone whose favourite part of Derry Girls is the dynamic of Erin and Orla's family last night's episode was my HEAVEN."

Another wrote: "Just watched the new Derry Girls episode and the younger version of the parents are so much like the girls it's uncanny." 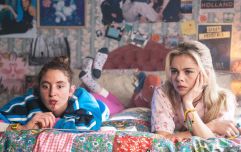 END_OF_DOCUMENT_TOKEN_TO_BE_REPLACED

A third shared: "LOVED tonight's episode of Derry Girls. I usually hate TV flashbacks but this was brilliant. Casting perfection."

"Watch this space," she wrote. "They're all going to go on to do cracking stuff."

The final episode of Derry Girls airs next week, and in the sneak peak, we see some Dubliners pick a fight with James over a pair of Fatboy Slim Tickets.

Then, on Wednesday 18 May, there will be a one hour special on Channel 4.

popular
Traditional names such as Mary, Maureen, John and Michael may soon be extinct
Doctors urge women not to follow Kourtney Kardashian's 'semen' fertility advice
Husband of school teacher killed in Texas shooting dies of heart attack
Two racehorses die after escaping from Dublin field
Two My Chemical Romance fans get engaged at Dublin gig in viral TikTok
Bridgerton's Ruby Barker hospitalised amid "mental health struggle"
The 2 Johnnies share unbelievable catfish ordeal as woman 'targets 40 people'
You may also like
1 week ago
A Derry Girls star made an appearance in Conversations with Friends last night
1 week ago
Viewers in bits over emotional Derry Girls finale special
1 week ago
Derry Girls creator shares three more storylines that never made it into the show
1 week ago
An ode to Derry Girls
1 week ago
Derry Girls fans in bits following emotional season finale
2 weeks ago
Yep, Saoirse Monica Jackson from Derry Girls and Denis Sulta are dating
Next Page