The Grace and Frankie cast are doing a live table read of the season seven premiere and the excitement is real.

The cast of the hit Netflix comedy - which stars Jane Fonda and Lily Tomlin - will be doing a live table read of the episode, titled The Fallout. The seventh and final season of Grace and Frankie is expected to debut on the streaming service next year.

It all begins on April 9 at 5pm PST/8pm EST on @NetflixIsAJoke's YouTube page.

Now for the bad part: because of timing, that means it's going to be beginning at 1am in Ireland. However, we're keeping our fingers crossed that the broadcast will be saved to catch up with later (pretty please?).

Staying at home but still rising up! Watch the cast of Grace and Frankie perform a live table read of a never before seen episode from our upcoming seventh season via @NetflixIsAJoke! pic.twitter.com/ROmzrq1BZK 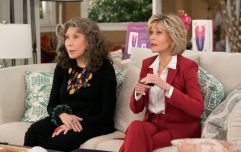 Grace and Frankie renewed for seventh season, making it one of the longest running Netflix series

END_OF_DOCUMENT_TOKEN_TO_BE_REPLACED

Following the table read, the series' co-creator Marta Kauffman will be moderating a live Q&A. The presentation is to raise funds for Meals on Wheels in the United States.

“While we’re sitting here afraid, unsure and isolated, we wanted to come together and do some good,” Kauffman told Deadline.

“All we’ve got is time on our hands and technology at our fingertips,” the Friends co-creator added as production on Season 7 was temporarily suspended late on March 12 as restrictions on large gatherings tightened in the City of Angels. “So we decided to use both of those assets to raise money for Meals on Wheels, which brings food to food-insecure and isolated seniors. They are among our most vulnerable right now and need our help.”

popular
This amazing hanging egg chair is coming into Aldi next week and go, go go (but safely)!
Lidl is launching a new hyaluronic skincare range and the serum is only €3.49
Patrick Dempsey Denies He Was Fired From Grey's Anatomy For Having An Affair With Intern
Richard Corrigan offering €90,000 wedding package prize for one Irish frontline healthcare worker
PSA: White Claw Hard Seltzer is launching in Ireland next month
Thursday set to be the hottest day of the year, says Met Éireann
After days of silence, Scott and Sofia finally comment on the break up rumours
You may also like
1 week ago
Her Quarantine Quiz Week 8: LOST
1 week ago
Retro Drive-in Movies is set to return and we couldn't be more excited about it
1 week ago
Cliona Hagan joins Ireland's top female artists in Women's Aid fundraiser
1 week ago
The Big Flower Fight: The wholesome landscaping content we deserve during lockdown
1 week ago
Normal People's Paul Mescal says he's 'looking forward to dating' after lockdown
1 week ago
Making your own masks? Aldi will have Harry Potter fabric in stock this weekend
Next Page