Thousands of people experience Glastonbury heartbreak every year when they fail to get tickets for the legendary festival.

It's always a scramble to try and bag some tickets for Britain's biggest festival, with many more people left disappointed than actually buying tickets.

However, thanks to the way the Glastonbury ticketing system works, there's another chance to buy tickets and it's right around the corner.

On Sunday April 23, you'll get another stab at buying tickets in the Glastonbury ticket resale, with a coach package going on sale a few days before, on Thursday April 20.

Following the closure of the seven-day ticket balance payment window for those who paid a deposit for tickets in the Autumn, we’re pleased to announce that a limited number of tickets for which the balance has not been settled will go into our ticket resale, which will be split over two separate days.

As in October, we will be giving the first opportunity to book tickets to those who choose to travel to the Festival by coach. The resale for Ticket + Coach packages will take place at 6pm BST on Thursday, 20th April. 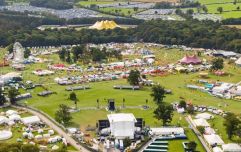 END_OF_DOCUMENT_TOKEN_TO_BE_REPLACED

Radiohead will headline the Friday night of Glastonbury, with Foo Fighters on Saturday and Ed Sheeran closing out the festival on Sunday.

popular
Mum accidentally names twins after TV show and now wants to change their names
Trolls target Emma Willis' eight-year-old son over pink clothes and long hair
Young people shouldn't be blamed for Covid spread, says Dr Tony Holohan
Government vote to seal mother and baby home records for the next 30 years
The shows and movies you need to watch before they leave Netflix next month
Lily Allen launches "life-changing" sex toy and yeah, fair play
I trialled the new products from the Alex Steinherr Penneys range and I have some thoughts
You may also like
10 months ago
Body and Soul confirms it is ending its 16-year association with Electric Picnic
1 year ago
A Christmas-themed wine and cheese festival is coming to Dublin
1 year ago
Guinness is bringing a new food festival to Dublin and we're there for the ramen
1 year ago
Electric Picnic has a new area and you're going to want it in your Insta feed
1 year ago
The dates for All Together Now 2020 have just been announced
1 year ago
Fears about 'bad batch' of drugs on market after recent deaths of young people
Next Page