Eastenders viewers will find out who killed Lucy Beale in the New Year but in the meantime, more information is set to come to light.

At the moment, the officers investigating the case believe they can account for everyone's whereabouts on the night Lucy was killed.

However, according to Inside Soap, a video found on Fatboy's phone will reveal that one resident hasn't been telling the truth about where they were on the night of the murder.

END_OF_DOCUMENT_TOKEN_TO_BE_REPLACED

Thinking it's just a funny clip, Fatboy shows his friends the video but Lee Carter knows the footage is from the night Lucy died.

Lee then has to make a decision between confronting the person in question and bringing the new evidence to the police.

In a separate discovery, Jane and Ian find an unsent message on Lucy's phone and they are completely shocked when they realise who the message was meant for. 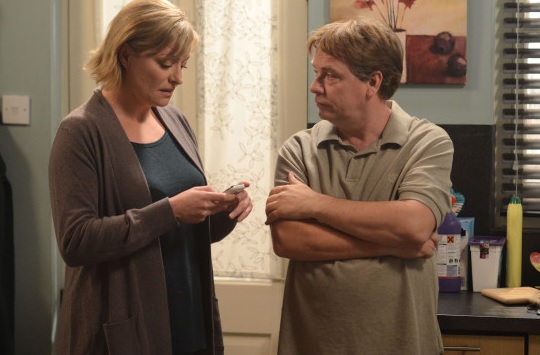 Jane and Ian are left shocked after this discovery

The killer will be revealed in 2015 as part of the show's 30th anniversary celebrations but we're pretty sure things get considerably more complicated before that happens...

popular
Netflix's true crime series Sins of our Mother is seriously insane
So, William and Harry have a step sister... and who knew?
Why Are Men so Obsessed With Boobs? The Answer is Pretty Surprising...
Actor and Wife To Divorce After 23 Years of Marriage
23 shows with four or more seasons to watch on Netflix
Here's what happens on every day of your menstrual cycle (roughly)
You’ll Never Guess Who the Richest Actor in the World Is…
You may also like
4 weeks ago
Eastenders' Adam Wodyatt: "I'm not just Ian Beale, there is an actor behind Ian Beale"
1 month ago
Samantha Womack recuperating following breast cancer diagnosis
1 month ago
EastEnders star Samantha Womack reveals she has breast cancer
5 months ago
Eastenders to create male sexual assault storyline involving Ben Mitchell
5 months ago
EastEnders actor sentenced after shouting "Black lives don't matter"
5 months ago
EastEnders star Melanie Clark Pullen dies from cancer aged 46
Next Page