Baby Shark is the catchy YouTube phenomenon that is showing no signs of slowing down.

It was created by a YouTube channel called Pinkfong - a South Korean channel for kids, which makes videos of sing-along songs and dances.

The video was originally released back in November 2015 but only started to spread globally this summer.

It has spawned a series of cuddly, singing toys (which seem to be the must-have gift this Christmas) and even featured on this year's Late Late Toy Show.

Now, a brand new version of the viral song Baby Shark has surfaced online - and just in time for the holiday season.

The Christmassy track, called Santa Shark, is already proving to be a huge hit 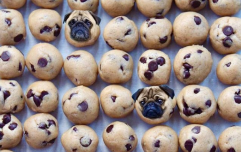 END_OF_DOCUMENT_TOKEN_TO_BE_REPLACED

The festive take on the super-catchy song introduces a number of new characters, including Santa Shark, Reindeer Shark, and Elf Shark.

The new lyrics see the characters make the toys, wrap them up and loading up the sleigh - all followed by 'do, do, do, do, do, do, do' - before swimming off to deliver the Christmas gifts.

More than four million people have watched the video since Super Simple Songs shared it on YouTube in late November.

popular
QUIZ: How well do you remember The Princess Diaries?
Will Smith admits to 'failing miserably' in 21-year marriage to Jada Pinkett Smith
Easy breezy: 5 comfy summer dresses you'll want to live in right now
Netflix confirms that The Crown will have a sixth season after all
Glossier: A first-time buyers guide to this cult beauty brand
Security footage released of Naya Rivera as search is updated to recovery mission
Someone has ranked the penis size of men from all over the world
You may also like
1 week ago
Quarantine Barbie: She exists and she's far too real
2 weeks ago
Here's how to make a vegan 'fried egg', according to an Australian food blogger
2 months ago
Kids have been applying to 'work from home' with their dogs during lockdown and nah, too much
3 months ago
The Duchess of Cambridge has revealed Prince Louis' favourite song (and it's a classic)
5 months ago
A postpartum ad has been banned from the Oscars this year
5 months ago
The internet is bursting with beautiful tributes to #girldads and it's all thanks to Kobe Bryant
Next Page