Oooh, things are heating up.

It was an episode all about romance last night as talk turned to secret crushes, age differences and... Ant and Dec.

It all began with Myles having a sore neck after waking up from a nap, which was followed by Kate Garraway telling him to get into her bed.

END_OF_DOCUMENT_TOKEN_TO_BE_REPLACED

"There’s an offer you aren’t going to get every day," said Cliff before Myles said, "I can’t turn that one down, definitely not, Kate Garraway in your bed."

And yep, it turns out Myles fancies Kate.

The singer told Kate in the episode: "You are one of my TV crushes, you are beautiful."

#ImACeleb
Who can blame Myles, Kate is stunning for her age.

At first the radio presenter was flattered, telling the Bush Telegraph: "That’s good to know because I think when you approach 50 it feels like you are no longer attractive. It’s a massive number and it feels like a big thing."

She then continued on to say that she thinks Myles was just being kind and that it "was his charity work for the year!"

END_OF_DOCUMENT_TOKEN_TO_BE_REPLACED

This prompted a conversation between Myles, Nadine and Jacqueline about age differences.

"You’ve slept with someone older than your mum?" Jacqueline asked Myles to which he coyly replied: "Yep." When the girls tried to divulge more information, Myles simply responded that it happened on a night out.

Later in the episode, talk turned to the presenters of the show, Ant and Dec, and how attractive they are. 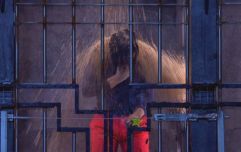 END_OF_DOCUMENT_TOKEN_TO_BE_REPLACED

Jacqueline said: "I didn’t realise they were good looking and then we said what one would you have, she said Dec and I said Ant at the same time."

She then told the Bush Telegraph: "Ant and Dec are a bit of alright actually, they are funny, they smell good and as they get older they look even better. I don’t know if they are having work done but they are getting better looking and potentially looking younger."

Girls With Goals || Her · Ep.161: Feeling Peachy - Sharon Keegan of Peachylean on being an absolute BOSS!
popular
Emilia Clarke is set to be the next Marvel superhero
Jennifer Lopez and Ben Affleck just became Instagram official
The sad reason why viral gymnast, Katelyn Ohashi, isn't on the USA Olympic team
Here's what happens on every day of your menstrual cycle (roughly)
Love Island's Dr Alex marks one year anniversary of brother's passing
How to INSTANTLY unblock your stuffy nose (we swear this works)
Sunburned? Eating these 5 foods will help your skin heal from within
You may also like
1 month ago
Love Island's Tommy Fury is getting the nod for this year's I'm a Celeb
8 months ago
Ex-housemate has no sympathy for I'm A Celeb's Jordan North - because he let her gerbil die
8 months ago
Vernon Kay appears to be name dropping every celebrity on the planet on I'm A Celeb
8 months ago
'Ghost' spotted on first night of 'I'm A Celeb' at Gwrych Castle
8 months ago
I'm a Celeb's Jess Plummer "secretly" split from boyfriend before show
8 months ago
I'm A Celebrity viewers baffled as they spot an "unnecessary" detail
Next Page