Catherine Cawood is back.

Filming for the third and final season of Sally Wainwright's hugely popular procedural drama Happy Valley is currently underway, and we cannot wait. 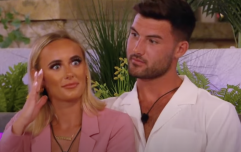 END_OF_DOCUMENT_TOKEN_TO_BE_REPLACED

Yesterday, the BBC shared a first look of the upcoming final series with viewers, and also outlined the cast members reprising their roles, as well as some new additions.

In their statement, the BBC said: "Sarah Lancashire returns to her iconic role of Sergeant Catherine Cawood for six new episodes, long discussed by Sally Wainwright and Sarah Lancashire as the final chapter of the Happy Valley story."

🎬 Filming has begun on #HappyValley series three, as new and returning cast members are announced.

END_OF_DOCUMENT_TOKEN_TO_BE_REPLACED

New additions to the cast include Amit Shah, Mark Stanley and Mollie Winnard who will all play "pivotal roles" in the show's final instalment.

In terms of plot, the series will centre on the discovery of the remains of a gangland murder victim in the town's reservoir. Catherine's investigation into the case eventually brings her back to Tommy Lee Royce once more.

popular
Traditional names such as Mary, Maureen, John and Michael may soon be extinct
Young mum packs her bags and travels the world with 3-year-old son
When can we expect the outcome of the Johnny Depp vs Amber Heard case?
Doctors urge women not to follow Kourtney Kardashian's 'semen' fertility advice
Charlie Bird has shared his bucket list as he hopes to see Bruce Springsteen next year
Bridgerton's Ruby Barker hospitalised amid "mental health struggle"
Husband of school teacher killed in Texas shooting dies of heart attack
You may also like
1 week ago
The Toy Show Musical is looking to cast young girl in lead role
1 week ago
Derry Girls fans in bits following emotional season finale
1 week ago
Harry Styles to become next star to read a CBeebies bedtime story
1 week ago
Season 3 of Bridgerton will be all about Penelope Featherington
1 week ago
Conversations With Friends tackles sexuality the way Normal People tackled sex
1 week ago
Eurovision producers reveal "irregular voting patterns" during Saturday night's final
Next Page