This is going to be SO good.

The first look at the new season of Shipwrecked is here - and it looks like it is going to be more explosive than ever.

The show - which first ran as a social experiment - originally launched in 2000, running for three seasons before it went off air in 2001. 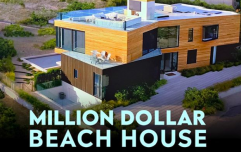 END_OF_DOCUMENT_TOKEN_TO_BE_REPLACED

It returned to television screens in 2006, with a new "battle of the islands" format. It ran for a total of eight series, with the final one airing on E4 in 2012.

Earlier this year, it was revealed that the show was going to be coming back again with a revamp for 2019.

A TV insider told The Sun at the time that the decision was made due to the mammoth success of Love Island.

Now, the first look at the new season of the classic noughties show is here - as well as the first details about what fans can expect.

The new series of Shipwrecked will see a batch of adventurous young castaways competing in the ultimate popularity contest on two uninhabited paradise islands in the South Pacific.

The two tribes – Sharks and Tigers – will battle it out to win over new arrivals to their respective islands, with a £50k prize fund at stake for the largest tribe at the end of the competition.

Check out the trailer below.

Girls With Goals || Her · Ep.154: Scholarship Squad Take 2 - Smurfit alum Grace Milton
popular
Irish designer "mindblown" as Dr Jill Biden wears dress she embroidered
Leo Varadkar says if Ireland introduced mandatory hotel quarantine, it would have to do so for a year
New Zealand set to close its borders for the entirety of 2021
Influencer justifies trip to Dubai saying it was essential for her "mental health" and to "motivate" followers
Dad designs bikini line for transgender teens
Kylie Jenner just posted a naked snap on Instagram, and people are NOT happy
Someone has ranked the penis size of men from all over the world
You may also like
1 year ago
New Irish show is looking to reunite contestants with their first loves
1 year ago
People are saying that this new dating show is WAY better than Love Island, and we're obsessed
1 year ago
It looks like Amber Gill could be going on another popular reality TV show
1 year ago
Anton's MOTHER was our Love Island highlight last night for this reason
1 year ago
11 things I learned watching Love Island USA
1 year ago
Love Island's George let slip his real feelings for Lucie and it's not looking good
Next Page