In case you haven’t heard, Dead To Me recently returned to Netflix for its highly-anticipated second season.

And while there was plenty of drama in the lead up to the final moments, it tuns out Dead To Me was meant to end with a pretty big (and dark) cliffhanger.

SPOILERS FOR SEASON TWO OF DEAD TO ME LIE BEYND THIS POINT. 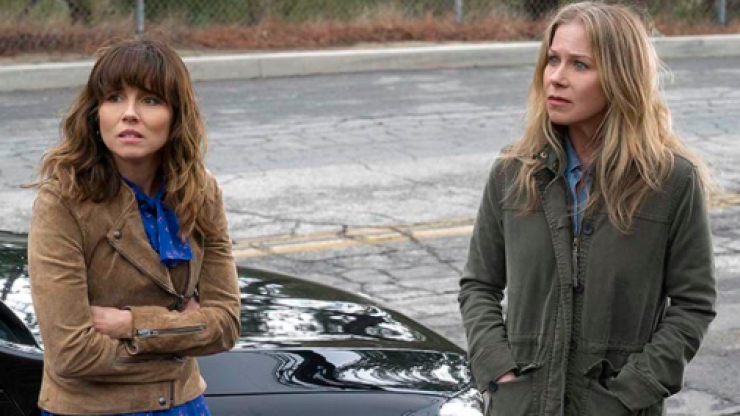 Still with us? OK, cool.

Showrunner Liz Feldman recently spoke to TVLine where she revealed the original ending for season two - which was meant to be a whole lot darker than how things played out.

Yes, it turns out that the second season was meant to end with Ben hitting the Jen and Judy’s SUV. But while both Ben and Judy’s fates would’ve been made clear (that they were OK and didn’t have a scratch on them), Jen’s was meant to be more ambiguous as the screen would have cut to black.

Thankfully, that’s not how it ended up - Jen ended up coming to after the crash, muttering a quiet ‘oh shit’ after opening her eyes.

END_OF_DOCUMENT_TOKEN_TO_BE_REPLACED

Feldman told TV Line that the decision not to end season two on a cliffhanger was one that she had made “very mindfully”, and that in the original script we weren’t meant to know if Jen survives or not.

“We [initially] wanted to go for the most dramatic version of [the] scene. And when we shot the version of it with Jen not coming to, it did [indeed] feel incredibly dramatic. But it also felt pretty dark,” she continued.

“And so on the day we were shooting it I very quickly went, ‘You know what? Let’s quickly get a shot of her eyes opening and her waking up and saying something.’ So we added that to it.”

She added that she’s glad they made the decision that they did, as it is “just much more satisfying.”

“I’m always interested in leaving people with an element of fun. Also, I’m not a big fan of Schmuck Bait. I like to give my audience credit. I know they know that we’re not going to kill off [Christina Applegate] at the end of Season 2. It felt like it would’ve been a bit insulting to the audience,” she said.

popular
Kate Middleton has addressed the rumours that she's pregnant with her fourth child
Curtain bangs are trending - here's everything you need to know
Will there be a second season of Gilmore Girls: A Year In The Life? Here's what we know
The Queen has banned Meghan Markle from wearing any of Princess Diana's jewellery
Here's the average age people lose their virginity around the world
QUIZ: How well do you really remember the first episode of Sabrina The Teenage Witch?
Eight Of The Best Films And Documentaries On 9/11
You may also like
3 days ago
Netflix shares trailer for fascinating David Attenborough documentary
4 days ago
WATCH: Netflix to release documentary on the Watts family murder
6 days ago
5 Netflix releases to keep an eye out for in October
1 week ago
4 new additions to Netflix to spend your weekend watching
1 week ago
Selling Sunset's Chrishell Stause reveals "the brokerage has split"
1 week ago
Netflix's Cheer star Jerry Harris arrested on child sex images charge
Next Page