The documentary maker's latest series has got people talking.

Louis Theroux is back at it again and this time it’s in a three-part series called Dark States.

The second documentary from the series, Trafficking Sex, aired last night and included the moment he sat down with a former pimp.

Shederick Smith is currently serving a 42-year sentence in prison in Amarillo for trafficking a 15-year-old girl, known only as LD in the court documents. 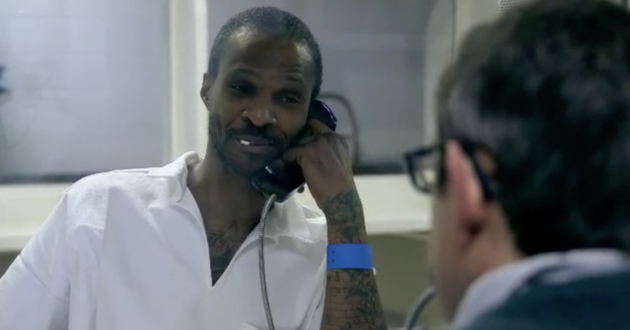 During his conversation with Theroux, Smith seemed completely unapologetic for his work as a pimp, claiming that many of the girls he “worked with” enjoyed the work.

“Some women are just hoes. You know? They’re prostitutes, and that’s all they're gonna be.”

In official documents, LD said there were times she didn’t want to work with Smith and that he treated her badly.

Smith defended himself by saying the girl in question was only with him for seven days which wasn’t enough time to be “too horrible”.

The interview was chilling to watch but was praised by viewers who again commended Theroux for his incredible skill.

Louis Theroux is simply a master of journalism. Although he focuses on others, it’s him I find fascinating.#LouisTheroux #DarkStates

Louis Theroux shows us time & time again that the way to get the most vulnerable to talk is to listen, be subtle, & listen again #DarkStates

However, they also commented on the way Theroux chose to greet the interviewee.

The final part of the series is due to air next week and it focusses on District 5 in Milwaukee where the homicide rate is over 12 times the national average.

popular
Simon Harris gives three urgent options for easing restrictions next week
Addison Rae temporarily banned from TikTok
Khloe Kardashian has JUST confirmed she is pregnant
The First Quadrillionaire? Paypal Accidentally Gives Man $92 Quadrillion
This TikTok hack shows you how to pack more despite baggage allowance
Tributes paid to Limerick based blogger and model Patrick McLoughney
Another Strictly star has pulled out of the live show
You may also like
1 week ago
Squid Game fans spot massive clue in Tug of War game
1 week ago
Disappointment as The Den has been cancelled again
1 week ago
Why we can't stop watching Squid Game
1 week ago
Looks like Irish gangland drama Kin will return for more seasons
1 week ago
Tilly Ramsay moves dad Gordon to tears after performance on Strictly
2 weeks ago
Louis Theroux is making another documentary about rap
Next Page