This was a brilliant moment.

I'm a Celebrity...Get Me Out of Here! returned to our screens on Sunday night and so too did everybody's favourite pair of presenters.

The image of Ant and Dec, together again, greeted viewers at the beginning of the 2017 series and it was a welcome sight.

"We're here for the next three weeks," Dec started. "Your hosts with the most. Me and... the gorgeous Holly Willoughby."

Look who's back! 😄🎉 Try not to put the Celebs through too much this year, boys... unless it's really funny #ImACeleb pic.twitter.com/lqOUtE9TMx

With that, Dec put his finger to his ear as if to make contact with a producer.

"Oh guys, that's the wrong script," he continued. "You've put the wrong script in the teleprompter. Nobody was sure if you would make it or not! We didn't know if you'd be here."

Cue faux offence from the returning Ant, who promptly embraced his television soulmate and insisted that he was "always going to make it back." 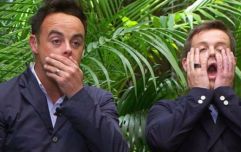 END_OF_DOCUMENT_TOKEN_TO_BE_REPLACED

The joke was an ice-breaking reference to the fact that Ant has been away from the spotlight for several months after checking himself into rehab in June for drink and drug addiction.

The 42-year-old revealed in the summer that he'd been battling depression and an addiction to prescription painkillers following knee surgery.

But, thankfully, Ant looked happy and healthy when he returned to our screens on Sunday night and viewers couldn't have been more pleased.

LOL at Dec taking the piss out of Ant's possible non-appearance!! #imaceleb

OMG so nice to see them laughing and joking about ant, so glad he’s better #imaceleb

Love the Holly Willoughby gag to welcome back Ant - good to see him back on top! #ImACelebrity

So happy to see @antanddec back together and back on top form. And a cheeky joke about Holly Willoughby replacing Ant...#ImACeleb

#ImACelebrity only ant and Dec could open with a joke like that...so happy to see ant in fit form

When Ant and Dec can joke about the fact that they didn’t think Ant would make it... #ImACeleb pic.twitter.com/Gkuc6zLCJu

Girls With Goals || Her · Ep.155: 'Bits of Me' - Linnea Dunne on the importance of women's health
popular
Tried and tested: I tried the viral TikTok mascara hack to see if it really works
Matilda's Bruce Bogtrotter is a doctor now - and he doesn't even like chocolate
Someone has ranked the penis size of men from all over the world
Scarlett Moffatt discovers ‘30% rain’ on weather app doesn’t mean chance of rain
Here's what happens on every day of your menstrual cycle (roughly)
Kate Winslet experienced "horrible" body shaming after Titanic
Why Are Men so Obsessed With Boobs? The Answer is Pretty Surprising...
You may also like
3 months ago
Ex-housemate has no sympathy for I'm A Celeb's Jordan North - because he let her gerbil die
3 months ago
Vernon Kay appears to be name dropping every celebrity on the planet on I'm A Celeb
3 months ago
'Ghost' spotted on first night of 'I'm A Celeb' at Gwrych Castle
3 months ago
I'm a Celeb's Jess Plummer "secretly" split from boyfriend before show
3 months ago
I'm A Celebrity viewers baffled as they spot an "unnecessary" detail
6 months ago
I’m A Celebrity...Get Me Out Of Here! confirms location for 2020 season
Next Page