Away shows that sometimes to reach for the stars, we must leave home behind.

Nothing sweeter than a new series being added to the list of things to watch on Netflix.

This next one has some hype around it because Hilary Swank is one of the leads and she doesn't mess around when it comes to drama having won not one Oscar but two for Best actress Oscars for her starring roles so we're dying to see what she'll be like playing an astronaut.

Away which stars Swank and former Good Wife cast member Josh Charles follows the story of an international space crew who are on their first mission to the red planet, better known as Mars.

Hilary Swank plays Emma Green, the lead astronaut who had to make the tough decision to leave her family behind to head the mission to Mars. Watch the trailer on YouTube here.

The teaser trailer shows Sawnk as an astronaut reading a letter she wrote to her family on earth while a tear drops down her face, judging by the clip you can tell it's going to be an emotional show, I was getting a few Armageddon vibes from the clip! 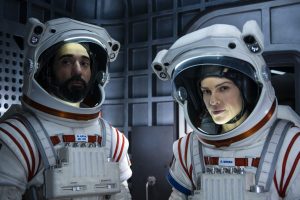 The press release explains: “As the crew’s journey into space intensifies, their personal dynamics and the effects of being away from their loved ones back on Earth become increasingly complex.”

END_OF_DOCUMENT_TOKEN_TO_BE_REPLACED

"Emma Green (Hilary Swank) prepares to lead an international crew on the first mission to Mars, she must reconcile her decision to leave behind her husband (Josh Charles) and teenage daughter (Talitha Bateman) when they need her the most."

Hilary Swank is best known for her role in Million Dollar Baby, she was praised by critics for her portrayal of a female boxer, which she won one of her Oscars for back in 2005.

"The Netflix series AWAY is a thrilling, emotional drama on an epic scale that celebrates the incredible advancements humans can achieve and the personal sacrifices they must make along the way."

Away shows that sometimes to reach for the stars, we must leave home behind. Created by Andrew Hinderaker, the series is executive produced by showrunner Jessica Goldberg, Jason Katims, Matt Reeves, Andrew Hinderaker, Edward Zwick, Hilary Swank, Adam Kassan and Jeni Mulein.

popular
Trolls target Emma Willis' eight-year-old son over pink clothes and long hair
Mum accidentally names twins after TV show and now wants to change their names
Government vote to seal mother and baby home records for the next 30 years
Lily Allen launches "life-changing" sex toy and yeah, fair play
4 places you can get a pumpkin spiced latte this weekend that aren't Starbucks
6 cosy things from Irish brands to make staying home a little easier
'Equity embraces our differences': Caterina Scorsone writes beautiful post about daughter's Down Syndrome
You may also like
1 week ago
Elf on the Shelf is coming to Netflix because parenting in 2020 just isn't hard enough
1 week ago
The Haunting of Bly Manor's Flora is actually the voice of Peppa Pig
2 weeks ago
3 new Netflix additions you can cosy up with for October
2 weeks ago
The Princess Switch: Switched Again hits our screens next month
2 weeks ago
9 thoughts I had while bingeing Misfits for the first time
2 weeks ago
GLOW has been cancelled by Netflix because of Covid-19
Next Page