Series 3 of Catastrophe is back, and it's bloody funny

Were you googling 'Fat Johnny Depp' last night? because we were.

The award-winning Catastrophe has finally returned to our screens, written by and starring Sharon Horgan and Rob Delaney, we're happy to report that the Channel 4 series DID NOT DISAPPOINT.

We won't give too much away in case you're waiting for a good old fashion BINGE, but we can say that it shows no signs of weakening. 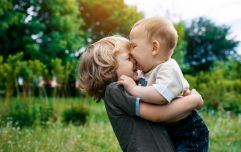 After Stormi and Aire, here are 32 baby names also inspired by the elements

END_OF_DOCUMENT_TOKEN_TO_BE_REPLACED

Those invested in these characters should be warned; the mood is darkening, and it looks like there could be some choppy waters ahead. Real life seems to be at the forefront of this series with Rob off the wagon and out of a job.

The series picks up right where the cliffhanger left off and the hilarity ensues when Sharon Horgan's character can't quite recall if she's strayed.

If one moment stands out for us, it has to be when Rob confesses to trawling through Sharon's search history;

"It’s primarily black guys and fat Johnny Depps. I can’t compete with that".

Cue every single person in the UK and Ireland wondering what fat Johnny Depp looks like.

#Catastrophe has changed my life with the discovery of #FatJohnnyDepp ??

If this is the sign of things to come, we could be looking at the best season yet.

popular
Molly-Mae Hague fans think they officially know her baby's name – and it means cloud
Baby found unattended in pram in Dublin, Gardaí reveal
Tasha Ghouri hits back at another islander who called her relationship fake
Joanna Cooper heartbroken after her mum is diagnosed with dementia
Blake Lively cast in film adaption of It Ends With Us
Gwen Stefani reportedly pregnant with baby number four
Anne Hathaway shares disappointing news about The Princess Diaries 3
You may also like
3 days ago
Bruno Tonioli confirmed as David Walliams' Britain's Got Talent replacement
3 days ago
Where to watch 2023's ten Best Picture Oscar nominees
3 days ago
Love Island's Haris reportedly dumped from villa after street brawl video
5 days ago
Netflix is about to launch the Avengers Assemble of reality dating shows
3 weeks ago
All of the new Netflix movies and shows arriving in January
1 month ago
This is every film showing on TV on St Stephen's Day
Next Page