Rebecca Humphries has penned an emotive article for Vogue following her split from Seann Walsh.

The actor said that she wanted to thank those who had support her following the breakup and address the new strength she had found in herself.

She dumped the comedian over a month ago after he was caught cheating on her with fellow Strictly Come Dancing contestant Katya Jones.

At the time, she wrote that Walsh had called her "crazy" for suggesting that he was cheating on her and urged other women to trust their instincts.

This week, in an article for Vogue, Humphries said that it had been a "revelatory few weeks" and that she had forgotten how strong she was.

"On October 8, I had an aim: to present a more fully formed and accurate version of a woman than the neater, simpler character of 'spurned partner' that was already being run with.

"The woman whose truth I was standing up for was myself. In doing so came revelation number one; that of a strength and resoluteness I had forgotten I possessed." 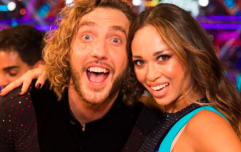 END_OF_DOCUMENT_TOKEN_TO_BE_REPLACED

Humphries went on to say that she was surprised to see the details of her life "splashed across front pages by complete strangers" and that she wanted to thank those who offered their support.

"But perhaps the biggest shock (no mean feat), has been of the thousands of people who recognised the Wonder Woman behind that statement was at the same time standing in the ruins of a shattered reality - and their rush to offer humour, perspective and life-force to help rebuild it."

"It has gifted me the tools to sweep up the shattered bits and rebuild myself - but better," she said. "This time round I shall be diamond studded with self-worth."

Walsh and Jones were the fifth couple to be voted off Strictly a few weeks back.

Jones maintains that her marriage was not hurt by the incident.

popular
Daisy Coleman from Netflix's Audrie & Daisy has died, aged 23
Rupert Young, twin brother of Will Young, passes away, aged 41
The second season of Dirty John lands on Netflix next week and we’re already hooked
Staycation: TripAdvisor reveals the top 10 hotels in Ireland for 2020
WATCH: Sneak peak of Paul Mescal in latest Rolling Stones' music video
WATCH: Paul Mescal stars in new Rolling Stones' music video 'Scarlet'
Kate Middleton has addressed the rumours that she's pregnant with her fourth child
You may also like
1 year ago
'People make mistakes': Neil Jones on wife Katya's kiss with Seann Walsh
1 year ago
Strictly's Seann Walsh says behaviour towards ex Rebecca Humphries was 'form of abuse'
1 year ago
'Have I actually done anything that wrong?': Seann Walsh on cheating with his Strictly partner
1 year ago
Strictly producers deny show is fixed after last night's shock elimination
1 year ago
Strictly viewers were FUMING after 'fixed' results but here's what we didn't see
1 year ago
Strictly viewers convinced producers kept Seann and Katya 'apart' during dance
Next Page