Behold; a dog with a human face exists and he's freaking everyone out

Humans are nice too, sometimes.

Combine the two are you're likely to end up with a being that is pretty nice, very cute, and will absolutely eat all of your ham whenever you leave it lying around.

Or you'll end up with something mildly terrifying, like this dog that has the face of a human.

THIS DOG HAS A HUMAN FACE pic.twitter.com/nEmQ6ZgJcZ

END_OF_DOCUMENT_TOKEN_TO_BE_REPLACED

Now, we're more than well aware that this dog with a human face is not the dog's fault.

He was simply born this way, destined to make everyone who comes into contact with him vaguely uncomfortable.

And in fairness to him, he seems pretty happy about it all the same. 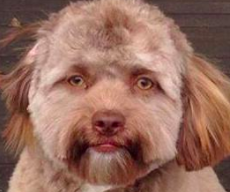 The photo was shared by Twitter user Ellie Hall who stated the obvious: "This dog has a human face."

There was Jake Gyllenhall.

I think it looks like someone else closer than Jake Gyllenhaal, but I can't figure it out pic.twitter.com/bSv34JcWwy

That dog is Topher Grace pic.twitter.com/FA1pKliqCF

Some might even argue that these are simply humans... with dog faces.

popular
Irish girls name was the most used Irish name in the United States last year
Met Éireann issues Status Yellow rain warnings for five counties
Love Island fans want Ekin-Su's family to get a reality show following Aftersun appearance
Aer Lingus apologises for multiple cancelled flights to and from Dublin Airport
5 simple ways to build a more positive mindset, according to an Irish therapist
Woman saved from hostage situation after leaving note on food delivery order
X-Factor star Tom Mann announces his fiancé's death on their wedding day
You may also like
6 days ago
Mass in Mayo church goes viral after spooky incident happens over livestream
2 weeks ago
People on TikTok are making 'healthy Coke' with just two ingredients
3 weeks ago
What the heck is #Swedengate – and do Swedish people really not feed their guests?
1 month ago
A couple in India has sued their son for over €600,000 for not giving them a grandchild
1 month ago
Woman shares genius hack for making any bra backless
1 month ago
Bride and groom praised for interesting way they decided on surname
Next Page