These 100 top lawyers want to you vote No on Friday: here's why

On Friday, May 25, Ireland will vote to repeal or retain the 8th amendment.

Here at Her, we've taken a clear 'Yes' stance - not just since the country learned that a referendum would take place, but over the last four years (take a look at some examples here, here, and here).

In short, it's likely to be a close-call - unsurprising due to the contentious nature of what we're being asked to vote on.

And now a group of 100 high-profile and respected legal professionals have signed an open letter - imploring the people of Ireland to save the 8th.

END_OF_DOCUMENT_TOKEN_TO_BE_REPLACED

"Don’t get angry, get even," their letter is titled.

They go on to state that many of us "are still undecided" when it comes to Friday's vote.

"Voters who believe that modest change is necessary are angry that they have not been given an option on Friday to make modest changes. They are angry that, instead, they are being asked to sweep away the constititutional [sic] protection of every unborn child and in place of this protection, are being asked to give the Government complete power to regulate when an unborn life is ended."

They explain that they believe the Government "could have approached the issue differently" focusing instead on only "exceptional cases such as rape".

"One option might have been to amend the Eighth Amendment (as it did in 1992 to deal with the issues of information and travel) another might have been a mixture of constitutional amendment and legislation, as was proposed in 2002.

"Instead, the Government chose a proposal which, despite the efforts of some commentators, the People know in their hearts is neither restrictive nor confined to exceptional cases."

It adds: "After reading the Bill, young men will ask why society and the State will hold them to account if they fail to pay maintenance to a pregnant partner, while the draft legislation gives them no role in saying whether their unborn child lives or dies.

"Young women will ask why there isn’t a single line in the draft legislation which supports or encourages the woman with a crisis pregnancy, rather than offering abortion as the only 'solution'."

They conclude by saying that a No vote "will be a new beginning". 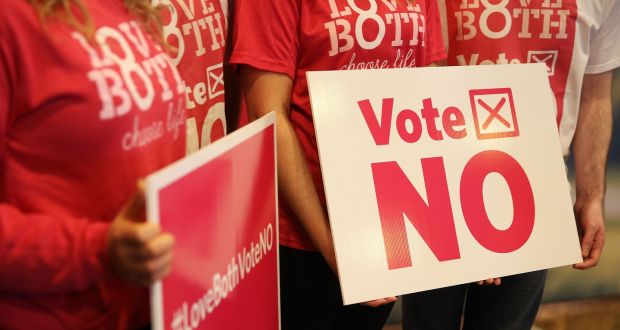 Iarfhlaith O'Neill, pictured in the feature image, is experienced in such matters: he had a central role in advising on the wording of the anti-abortion amendment inserted into to the Constitution in 1983.

A press conference to launch the letter and scheduled to be held at the Bar Council offices in Dublin was last month cancelled at short notice.

A spokesperson explained the reasoning: the Bar Of Ireland is a non-political organisation, reports IrishTimes.com, and its premises cannot be used for any political activity.