She has vowed to join the women of Iran in their protest.

Taraneh Alidoosti, who is one of the most prominent actresses from Iran, has posted a selfie on her Instagram page in which she is not wearing a headscarf.

Sharing the post with her 8 million followers, Taraneh holds a sign with a Kurdish message which translates to "Woman, Life, Freedom".

END_OF_DOCUMENT_TOKEN_TO_BE_REPLACED

According to the BBC, this slogan – as well as the act of removing headscarves in public – has become a popular rallying cry among women in Iran protesting the country's morality police.

Taraneh has appeared in over 20 feature films, and this isn't the first time she's voiced her protest. She previously stated that she would not leave Iran and stopped working in order to fight for the cause.

The past few weeks have seen widespread protests in the country following the death of Mahsa Amini. Amini had been arrested by the morality police, entered into a coma and died shortly after. The Iranian police claim that she suffered a "sudden heart failure", yet there have been reports that she was beaten with a baton and that her head was banged against a vehicle.

END_OF_DOCUMENT_TOKEN_TO_BE_REPLACED

Since then, it's estimated by local human rights groups that at least 328 people have been killed while protesting, while over 14,800 have been detained by the police.

The death of Ms Amini has received global condemnation.

Nada al-Nashif, the Acting UN High Commissioner for Human Rights, has called for an investigation of her death by an independent competent authority. 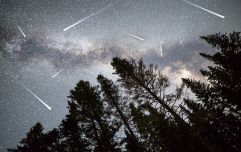 Meteor shower to be visible over Ireland tomorrow

END_OF_DOCUMENT_TOKEN_TO_BE_REPLACED

She said: "Mahsa Amini's tragic death and allegations of torture and ill-treatment must be promptly, impartially and effectively investigated by an independent competent authority, that ensures, in particular, that her family has access to justice and truth."

She also confirmed that the UN has received a number of verified videos showing the violent mistreatment of women in Iran.