Last week on Her, we covered a report commissioned by the 'Why Not Her?' campaign on gender parity across Irish radio stations. In the initial report, some stations - including 98FM, TodayFM, and Spin Southwest - had 10% or less Irish female musicians in their top 20 most played artists between June 2019 to 2020. Others such as FM104 and LMFM had zero. 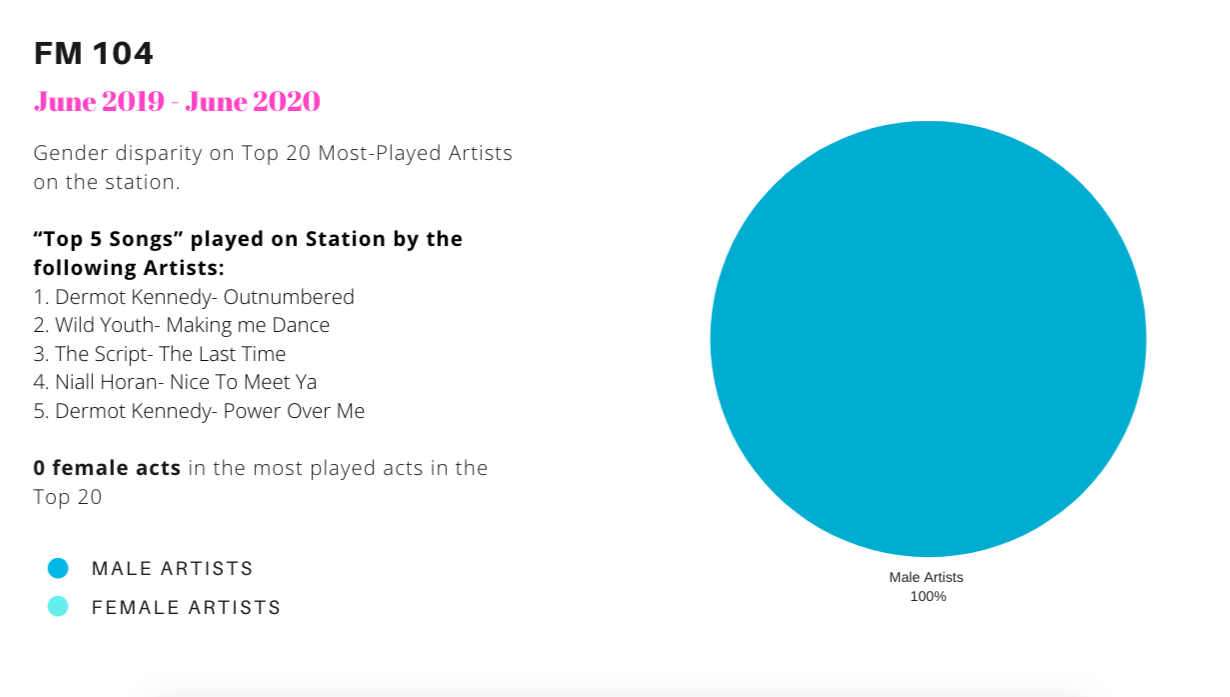 Why Not Her? Gender Parity Report 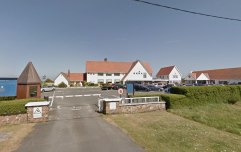 END_OF_DOCUMENT_TOKEN_TO_BE_REPLACED

In their updated blog post on their site the Why Not Her? campaign said, "FM104 continue to play 0% of Irish females on their top 20 highest played acts on their playlist".

Co-founder of Why Not Her? and music PR, Linda Coogan, spoke to us on the latest episode of Girls With Goals about the updated report findings, and FM104 in particular;

"Margaret Nelson is the CEO of FM104, Dave* and Mark are the Head of Music. They don't return my calls, they don't return my messages. They don't have to respond, they probably don't want to, but there's no legislation there's nothing in place that they should, or they have to and that's why they don't. They don't bother because they're like, 'You know what? We can do what we want here, we're gonna continue to play white, homogenised, same-sounding music on the radio station' and they're dictating the culture of the capital"

Linda went on to say it was encouraging that some stations are making change;

"We're so happy that Spin and 98 are on the rise, it's just wonderful. But then you see FM104, Today FM are on 5%. They haven't responded either they haven't returned anything that I've sent them... it's really troubling"

Her reached out to FM104 and spoke with CEO Margaret Nelson on the issue;

"We had a meeting arranged with Linda Coogan Byrne and it never happened, a scheduling issue I believe, but we're happy to meet and talk about what we can do"

When asked about the lack of gender parity on the station, Nelson said she leaves music decisions up to the music directors but that there's certainly no policy in place against having women on the airwaves;

"There isn't any policy that is anti-female, I'm one of the only female CEOs in this business, I wouldn't have a policy like that. We don't believe there should be a gender quota for music and it should be all about the artists, it should be the best person for the job the meeting with people from that campaign never happened but we're 100% willing to look at it and welcome discussions on it"

When pushed on the popularity of FM104 in the capital and the influence it has on emerging artists making it, she admitted that 0% is a "stark figure".

On Girls With Goals this week, we're also talking to Shauna Watson of the 'We've Only Just Begun' festival who have recently developed an online director for female and non-binary musicians working in the music industry.

Listen in to the full episode below:

Update on Gender Disparity report according to the Why Not Her? campaign

Her has confirmed that *Dave Kelly retired from FM104 and is no longer working with the company.

With regard to the report all data is based on Irish only artists, and those whose songs are registered on Radiomonitor.

Radiomonitor is the industry standard music airplay monitoring service used by all Record labels, Management companies and PR companies to evaluate the airtime allocated to artists/bands who have commercial releases in the Irish market and whose music is issued to Irish radio seeking radio airplay.

popular
Dublin Airport in "shambles" after weekend of chaos
3 simple but effective ways to prep your skin for the summer
Opinion: Why is everyone obsessed with Alexa Demie's age?
Why Are Men so Obsessed With Boobs? The Answer is Pretty Surprising...
Coleen Rooney shares "suspicious" DM she received from Rebekah Vardy before Wagatha Christie
Doctor Strange actress Zara Phythian receives 8 years for child sexual abuse
The Greatest Showman is becoming a Broadway musical and we need a second
You may also like
3 years ago
'They are my backbone, my rocks' - we love what Niamh Cullen says about her greatest female friendships
3 years ago
‘More than 60 percent of Irish women are employed yet they face significant challenges'
3 years ago
This top BBC presenter is earning nearly five times more than his female counterpart
4 years ago
Ireland's women's soccer team read mean tweets and are having none of it
4 years ago
McDonald's have made a huge change to their famous 'Golden Arches'
4 years ago
The diagram that shows how little women speak in Oscar-winning movies
Next Page