A Vietnamese mouse-deer thought to be lost to extinction has been spotted on camera for the first time in 30 years.

The silver-backed chevrotain, which is about the size of a rabbit, was last documented almost three decades ago. 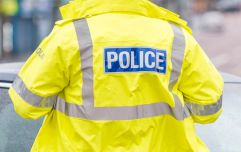 END_OF_DOCUMENT_TOKEN_TO_BE_REPLACED

It was later feared that they had become extinct due to poaching, but the shy animal has recently reemerged, caught on camera near the Vietnamese city of Nha Trang, by the Global Wildlife Conservation.

The mouse-deer is the first successful rediscovery from the group's list of top 25 most wanted lost species.

“For those of us living in Vietnam and working in wildlife conservation, the question of whether the chevrotain was still out there and if so, where, has been nagging us for years,” said conservation scientist An Nguyen.

A post shared by Global Wildlife Conservation (@global_wildlife_conservation) on Nov 11, 2019 at 10:22am PST

“There was very little information available to point us in the right direction and we didn’t know what to expect.

"That we were able to find it with so few leads and in a relatively short period of time shows how a little bit of effort and willpower can go a long way in finding some of these special species lost to science.”

Nguyen's team decide to set up camera traps in the areas where locals had reported seeing the creature.

END_OF_DOCUMENT_TOKEN_TO_BE_REPLACED

The biologist said that what they found on the footage was "amazing."

"I was overjoyed when we checked the camera traps and saw photographs of a chevrotain with silver flanks," she said.

"With three camera traps left in the field for five months, we were able to get 275 photos of the species. The Silver-backed Chevrotain went from being lost for at least 30 years, to found really within a matter of months."

A wider team is now working to determine how many silver-backed chevrotain exist in the region - and how stable the population is.


Girls With Goals || Her · Ep.161: Feeling Peachy - Sharon Keegan of Peachylean on being an absolute BOSS!
popular
Love Island fans pine for Tommy Fury's loyalty after last night's episode
Charlie Haughey's grandniece has won big for Hong Kong in the Olympics
Love Island's Georgia could tell Hugo had a thing for Chloe
The sad reason why viral gymnast, Katelyn Ohashi, isn't on the USA Olympic team
Who says you have to wear a dress? We're looking at alternative fashion options ahead of Ladies Day at the Galway Races
Triumph over trolls: Lisa’s Lust List opens up about her highcourt win
Here's what happens on every day of your menstrual cycle (roughly)
You may also like
3 days ago
Jennifer Lopez just shared a steamy snap of herself and Ben Affleck – and WOW
4 days ago
A fab new food hall and restaurant is coming to Dundrum Town Centre shortly
6 days ago
Survivor Charlene Masterson waives anonymity to encourage others to speak out on abuse
1 week ago
Status orange weather warning issued for six counties
1 week ago
Marissa Carter shares "good news" as Carter Beauty wins bronze at green beauty awards
1 week ago
Please don't ask me when I'm going to buy a house
Next Page