QUIZ: How well do you really remember the first episode of Sex and the City?

It's officially 20 years since Sex and the City premiered.

That's right. Carrie Bradshaw and co. first made their on-screen debut on June 6, 1998.

We know, we can't quite it's been so long, either. 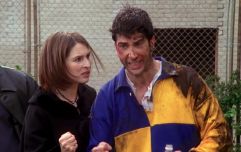 QUIZ: Match the Friends quote with the character who said it

END_OF_DOCUMENT_TOKEN_TO_BE_REPLACED

The series focused on the lives of shoe-worshiping, serial-dating columnist Carrie Bradshaw and her friends, Charlotte York, Samantha Jones and Miranda Hobbes.

It ran for six seasons, until 2004, spawned two movies (with on-and-off-again talk of a potential third one) and, basically, it became a worldwide phenomenon.

Especially since it had just the right mix of fashion, philosophy, and friends to reel us in hook, line, and sinker - and keep us tuning in week after week.

20 years on from the start of it all, we decided to take a stroll down Sex and the City memory lane.

Do you remember who were the very first characters we were introduced to? Or what about where we first met Carrie, Samantha, Miranda and Charlotte?

Reckon you know which paper Carrie worked for in the beginning? How about what really happened the first time she and Big met?

It's time to put your Sex and the City knowledge to the test and see how well you really remember the premiere.

Girls With Goals || Her · Ep.161: Feeling Peachy - Sharon Keegan of Peachylean on being an absolute BOSS!
popular
The DIY frozen coffee recipe that's so delicious you'll never pay for an iced latte again
Khloe Kardashian has JUST confirmed she is pregnant
How to INSTANTLY unblock your stuffy nose (we swear this works)
Here's the average age people lose their virginity around the world
Here's what happens on every day of your menstrual cycle (roughly)
Woman who gave birth to 10 babies speaks out following fraud claims by partner
Someone has ranked the penis size of men from all over the world
You may also like
1 week ago
QUIZ: Can you remember these memorable 90s and 00s TV show moments?
3 weeks ago
QUIZ: Test your knowledge with this Ultimate Friends Character Quiz
3 weeks ago
QUIZ: How well do you remember High School Musical?
1 month ago
QUIZ: How well do you really remember the first episode of Friends?
1 month ago
QUIZ: Can you beat Ross's quiz in Friends?
1 month ago
QUIZ: Can you name all of these Harry Potter characters?
Next Page