Chanel No5, The Film - You're The One That I Want

One of your favourite musical hits, like you've NEVER heard it before.

We've seen teasers, snippets and behind-the-scenes footage but now, finally, the Chanel No. 5 film is here and it's every bit as beautiful as you might expect.

Romeo & Juliet and Moulin Rouge director Baz Luhrmann steps behind the camera to direct supermodel Gisele Bundchen and Game of Thrones star Michiel Huisman in the three-minute video, set to singer-songwriter Lo-Fang's take on Grease mega-hit You're The One That I Want. 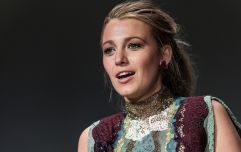 END_OF_DOCUMENT_TOKEN_TO_BE_REPLACED

"And in the end, the Chanel woman chooses love."

popular
Ekin-Su Cülcüloğlu signs the biggest fashion deal in Love Island history
Love Island producers respond to claims Jacques was kicked off the show for "bullying"
Met Éireann extends high temperature warning for Ireland this weekend
Lisa Kudrow addresses lack of diversity on Friends
Five teenage girls in hospital after Kilkenny crash
Paige Thorne breaks her silence on Jacques O'Neill drama
Love Island's Amber opens up on unaired fight between Remi and Jacques
You may also like
3 weeks ago
Sheridan Smith and Jenny Agutter on the wholesome experience shooting the Railway Children Return
3 weeks ago
Elvis star Shonka Dukureh found dead in her home by her child
4 weeks ago
Do we really need an Amy Winehouse biopic?
4 weeks ago
WATCH: The trailer for Harry Styles and Florence Pugh's film Don't Worry Darling is here
1 month ago
Netflix CEO confirms adverts are coming to the service
1 month ago
WATCH: First look at Ana de Armas as Marilyn Monroe in Blonde
Next Page