Anne Hathaway has announced she is pregnant with her second child.

The 36-year-old shared her happy news on Instagram on Wednesday evening, with a black-and-white mirror selfie that showed her baby bump.

"It's not for a movie...#2," she jokingly captioned the photo, before adding:

"⁣All kidding aside, for everyone going through infertility and conception hell, please know it was not a straight line to either of my pregnancies.

The Oceans 8 star is already mum to son Jonathan Rosebanks, who she welcomed in 2016, with husband Adam Shulman. 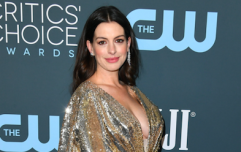 Anne Hathaway has 'revealed the sex' of her second child

END_OF_DOCUMENT_TOKEN_TO_BE_REPLACED

Earlier this year, she spoke about how Kate Middleton and Prince William had influenced her parenting style in a big way.

In February, she spoke to The Sunday Times [via PEOPLE] about raising their little boy, and how she had been inspired by Kate Middleton and Prince William's parenting style.

“They get down on the child’s level and speak to them eye to eye to make their child feel empowered.

“I thought that was really cool. I started doing that with Jonathan.” 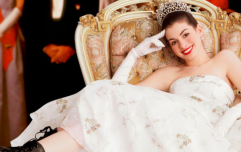 END_OF_DOCUMENT_TOKEN_TO_BE_REPLACED

The move is called active listening - and can have a massive impact on children.

Prince William and Kate are often seen crouching down to talk to their children, Prince George and Princess Charlotte (and, later on, we'd imagine they'll do they same with Prince Louis).

The Center for Parenting Education calls active listening "the single most important skill you can have in your parenting 'tool belt'" - as it shows the child you are giving them your undivided attention; listening and understanding everything they are saying

According to experts, the trick is simple but effective - and can boost self-esteem in a  powerful way.

popular
Irish girls name was the most used Irish name in the United States last year
Love Island’s Afia explains why Gemma’s dad has not been mentioned on show
Two dumped islanders have confessed their feelings for each other since leaving the villa
Love Island bombshell Antigoni also has a famous parent
Why Are Men so Obsessed With Boobs? The Answer is Pretty Surprising...
Gogglebox's Tom Malone Jr shares autism diagnosis
Selling Sunset's Maya Vander experiences miscarriage
You may also like
1 year ago
Anne Hathaway apologises to children with limb differences after The Witches remake
2 years ago
Anne Hathaway has revealed that her fall in The Princess Diaries was an accident
3 years ago
Police called to Anne Hathaway's The Witches set after crew member is stabbed
3 years ago
Anne Hathaway confirms work on Princess Diaries 3 is underway and we are SO excited
3 years ago
Emily Blunt says this is who The Devil Wears Prada's Miranda Priestly is REALLY based on
3 years ago
Anne Hathaway just debuted a new hair colour and it's pretty dramatic
Next Page