"I'm Not Doing Anything Illegal!" - Her.ie Chats To... Chelsea Handler

US presenter Chelsea Handler is one of our favourite women in television, pulling no punches in her E! chat show Chelsea Lately.

With four books, a string of movie appearances and a new television show under her belt, things are pretty rosy for Handler at the moment and with the comic bringing her stand-up show Uganda Be Kidding Me to Dublin this week, we thought it was only right to have a catch-up before the Olympic Theatre date.

Chatting to Her.ie on the phone from London, Handler is pretty much as you would expect her to be: decisive, straight-talking and offering absolutely none of the schmaltzy small talk that we've come to expect from celebrity interviews. She warns that those heading to Friday night's show can expect "a lot of nudity" and "very self-deprecating behaviour", adding that she embarrasses a lot of her friends "who are not speaking to me".

END_OF_DOCUMENT_TOKEN_TO_BE_REPLACED

"I’m always trying to ruin friendships but they should know by now because I’ve been friends with all of them for so many years. When we go on vacation, they know that the understanding is that the trip is paid for, everything is taken care of, but you have to have no respect for your personal privacy. Everything that you do will be documented because it serves my purpose to be a really, really terrible friend."

Chelsea's refreshingly blunt approach is also the key to her success with E!'s Chelsea Lately, which shuns the pandering PR-approved celebrity interview for more candid (and often controversial) chat. Aside from the fact that many of her high-profile interviewees are actually her friends, the 39-year-old reckons that one of the reasons that she has managed to push the boundaries that bit farther is that she has always stood by her comments and refused to back down in the face of criticism.

"Nobody should really take me that seriously anyway. Whether they do or they don’t is their business but I make fun of everybody pretty equally, myself included. I do get away with a lot and I think that’s because I don’t make it a habit to apologise for my behaviour," she says.

"If you apologise for something, then you have to be serious about it and I never really felt that way about that show. I’ve never felt really terrible about anything that I’ve said and I would usually stop myself if I thought something was crossing the line. If a guest was going through a divorce or something, I never went there. I’m not a big apologiser. I think when you make one apology when you’re in the public eye, then you tend to have to make them all the time. I don’t think that’s anyway to live. I’m not doing anything illegal!"

It's just as well that Handler has a thick skin as she has come in for some heavy criticism in the past, from accusations of racism over her tweets during this year's Oscars (after suggesting that Brad Pitt and Angelina Jolie wanted to adopt Lupita Nyong'o) to this week's comments from veteran comedian Joan Rivers that she is a "stupid girl" for leaving her hugely successful E! show.

Her response to Rivers' latest jibe? "I don’t have any reaction to Joan Rivers. She’s not on my radar. It’s her problem, it’s not my issue."

END_OF_DOCUMENT_TOKEN_TO_BE_REPLACED

Handler is much happier to talk about her upcoming collaboration with Netflix, which she confirms will see her front a nightly talk show for the website. While there had been speculation that the show would be released as a full series, similar to Breaking Bad and Orange Is The New Black, the comic confirms that it will instead feature topical episodes  that will be posted to the site several times a week.

Chelsea Lately may have focused mainly on celebrity content but Handler admits that she is hoping to "grow up a little bit" with her new programme, which will have a "quite comprehensive" remit and is "not going to be just sports, politics or comedy".

"I wanted to do a show that I find compelling so that my fans can be educated in the same way that I’m trying to educate myself. I’ll be trying to find interesting stories and ask a lot of the questions that people are probably too embarrassed to admit that they don’t know the answers to. I think I can do that in a really great format that livens things up for me, as well as the viewer," she adds.

"It’s not set in stone just yet but what we’re looking at is doing it three times a week and it will be released that day at a certain time. I think they are looking to change their history of doing things because this is a different kind of show for them and it’s a different kind of landscape for me as well, so we’ll join forces and figure out the best way to execute that. I want it to definitely be topical and I want there to be other things that take a longer time to investigate."

E! never quite seemed to be a natural home for Handler, whose interest in political journalism and attitude towards today's celebrity culture seemed at odds with a channel that has spawned the likes of Keeping Up With The Kardashians and Girls Of The Playboy Mansion.

END_OF_DOCUMENT_TOKEN_TO_BE_REPLACED

She admits that, while she is passionate about working on something with a little more substance, she "didn't try very hard to do that” in her previous post. 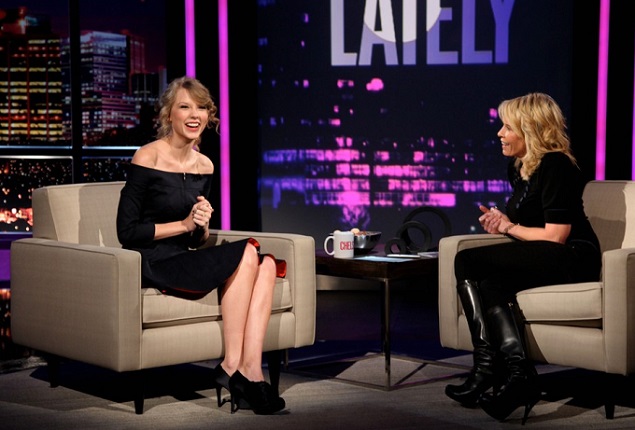 Chatting about her favourite guests, the Are You There Vodka? It's Me, Chelsea author says that she prefers to speak to those "who don't take themselves so seriously" and are "really honest and forthcoming about themselves".

"If you don’t want to divulge personal information, that’s ok but you can still have a personality during an interview and I find that to be really nice for the viewers and it’s nice for me when I can really have a conversation with someone. I like someone who can really talk, like Charlize Theron, she is a great guest. She’s a friend of mine and she comes on and she’ll say whatever’s on her mind. I like that. I guess I’m more prone to having conversations where I learn something about the person than the opposite and I’m sure any interviewer would say that."

And while she may seem calm, cool and collected at all times, she confesses that she had previously felt nervous ahead of certain interviews.

"Yeah, many times, absolutely. You get intimidated and sometimes it sneaks up on you and you’re like ‘oh I’m nervous all of a sudden’. It usually happens if you really respect the person and like the work, then I think you can get a little ‘oh gosh, this is happening’."

And with Handler moving on to greener and more intellectual pastures, would she like to see someone else stepping into her shows at E!?

"I don’t know, I haven’t heard anything like that. I would like that to happen but it’s not really my decision. It would obviously be wonderful for someone to take that job, it’s a show that’s already up and running. I would love for a girl to get that job. I don’t know if they’re doing that though, I think it’s just coming to an end. There’s so many female comedians, any of the girls that I have on my show I would love to see take that job or any other strong female comics. Maybe Joan Rivers?"

Chelsea Handler brings Uganda Be Kidding Me to the Olympia Theatre on Friday 11 July. Tickets, priced from €28, are available from ticketmaster.ie.

popular
Women are rinsing their hair in apple cider vinegar – and the results are amazing
Toddler dies after being struck by vehicle in Co. Cork
Clubbers left "bleeding from their mouths" after accidentally drinking shots with caustic soda
New photo of Bernadette Connolly released as investigation continues
Gardaí find "no evidence" of needle spiking in Irish nightclubs
Worried about a loved one? Here are 5 signs of suicide to look out for
Actor Michael Madsen's son Hudson has passed away, aged 26
You may also like
2 years ago
Turns out, this colour of wine gives you the WORST hangover
5 years ago
Gwen Stefani Receives Massive Backlash After "Insulting" April Fools' Prank
5 years ago
Katie Price Names And Shames The Twitter Trolls Bullying Her Son Harvey
5 years ago
Kim Kardashian Blasts "Body-Shaming and Slut-Shaming" In Brilliantly Honest Post
5 years ago
WATCH: Emma Watson Launched HeForShe Arts Week On International Women’s Day
5 days ago
Downton Abbey's Michelle Dockery has gotten engaged
Next Page