Kim Kardashian really took things up a notch for Hallowe'en this year.

The mum-of-four - who revealed earlier this year that she was studying to become a lawyer - shared her Hallowe'en costume with her followers on Thursday.

And it is amazing.

The reality TV star went as none other than Elle Woods from Legally Blonde.

She channeled Reese Witherspoon's character from the iconic 2001 romantic comedy with Elle's signature blonde hair and love of the colour pink. And let's not forget the little Bruiser that was poking their head out of her bag.

Oh, and she even recreated Elle's video essay that she submitted to Harvard - complete with the latest on Days of Our Lives. 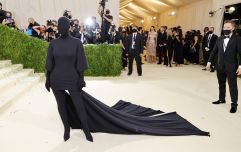 END_OF_DOCUMENT_TOKEN_TO_BE_REPLACED

And the Keeping Up With the Kardashians star isn't the only one to recreate the video lately.

Reese shared her own take on the poolside clip last summer ask she confirmed the news that Legally Blonde 3 was on the way.

And while there hasn't been too much news about the film since, we did get a release date for the film back in September - May 8, 2020.

You can also find the latest on Legally Blonde 3 here.